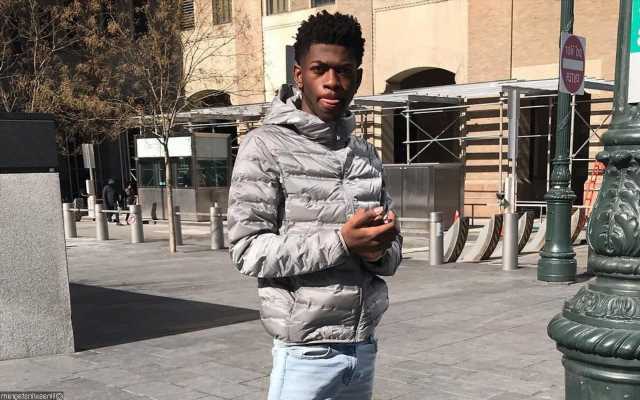 The ‘Call Me By Your Name’ hitmaker shares a snippet of his new track after he reveals that he has a new song with NBA YoungBoy and new collaboration with Saucy Santana following his ‘maternity leave.’

AceShowbiz –Lil Nas X obviously knows how to promote his music. The “MONTERO (Call Me By Your Name)” hitmaker went shirtless when he teased his upcoming song titled “Lean on My Body” one day after he returned from his three-month social media hiatus.

Making use of his Instagram account on Thursday, March 17, the “Industry Baby” rapper gave fans a one-minute sneak peek at his new track. In the clip, he wore nothing but a cap, gray sweatpants and orange Nike undies.

Nas X also mimed playing his keyboard along to the song while walking in place, before dropping some slick new bars. “You know I love you, so I sing this s**t with love/ But please tell your fans they need to shut the f**k up,” he raps, “I’m doin’ real s**t, some never worry ’bout a bill s**t/ Some build a house on the hills s**t/ The money’s gravy, it’s comin’ crazy.”

The clip came just one day after Nas X revealed that he has new projects with NBA YoungBoy (YoungBoy Never Broke Again) and Saucy Santana. Along with screenshots of “Late to the Party”, his collaboration with YoungBoy, and “Down Souf H**s”, his track with Santana, in his music library, he wrote, “Which one y’all want first?”

Nas X also turned to his Twitter account to launch a snippet of another new song. “Who y’all think i should get on this?” he captioned a nearly 2-minute clip of the track. In a separate post, the hip-hop star, who is set to perform at the 2022 Grammy Awards alongside Billie Eilish, BTS (Bangtan Boys) and Olivia Rodrigo, shared that he “wrote this song in a really depressing time of [his] life after losing a childhood bestfriend.”

After one hater criticized his song, calling it “horrible,” Nas X fired back, “This song is about my friend who passed away at 17. Take your trolling somewhere else!” The “Old Town Road” spitter added in a separate tweet, “I see some people not feeling it. Just wanna say it’s not mixed and mastered yet.”

Nas X, who quit social media after he announced his COVID-19 diagnosis in December, later hinted that a new album is coming soon. “New album close to finished,” the “That’s What I Want” hitmaker penned, before adding that he hasn’t picked any name for his upcoming second studio album.

Of his months-long hiatus, Nas X joked that he took “maternity leave.” He asked, “Why are people surprised i’ve been away for so long? Have y’all really never heard of maternity leave?” referring to the long-running joke of him giving birth to his debut album, “MONTERO”, last September.