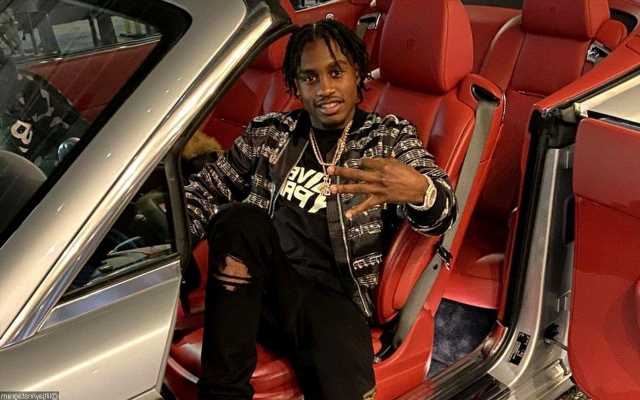 The ‘Calling My Phone’ rapper shares the happy news after he was shot multiple times in the chest and neck area in Edgewater, New Jersey in the early hours of June 22.

AceShowbiz –Lil Tjay will be back into the rap world anytime soon. Two months after he got shot in New Jersey, the “Calling My Phone” rapper announced his return with a huge billboard in New York City.

Sharing a photo of the billboard, which is located in the Bronx, was DJ Akademiks on Instagram on Tuesday, August 23. There was a message that read, “I’M BACK. – Lil Tjay.”

Tjay was shot multiple times in the chest and neck area in Edgewater, New Jersey in the early hours of June 22. It was reported at the time that there were two shooting sites, one at a Chipotle Restaurant and another at a nearby Exxon Gas station. Antoine Boyd, 22, also of the Bronx, who was with Tjay, was shot in the back, but survived.

The shooting suspect, Mohamed Konate of New York City, was arrested later that day. He was charged with three counts of first-degree attempted murder, three counts of first-degree armed robbery, and multiple weapons offenses. Antoine and Jeffery Valdez, who was also with Tjay but was not injured, were also arrested for second-degree unlawful possession of a weapon, but charges were later dropped.

In late June, TMZ reported that Tjay, whose real name is Tione Jayden Merritt, was awake and talking. Sources further told the outlet that “doctors recently removed his breathing tube, and when speaking, his voice sounds just like it did before the scary incident.”

Another update surfaced in early July as the emcee was seen having a video call with his friends or relatives from the hospital. In the footage, some folks were excited to see Tjay getting better. “He good, he good,” one woman was heard shouting, while another demanded that the rhymer “say something.” Another person remarked, “Tjay is good.”

Earlier this month, DJ Akademiks divulged that Tjay had been discharged from the hospital. He also shared a photo of the rapper flashing a big smile while sitting in what looks like a car during a FaceTime call with friends.