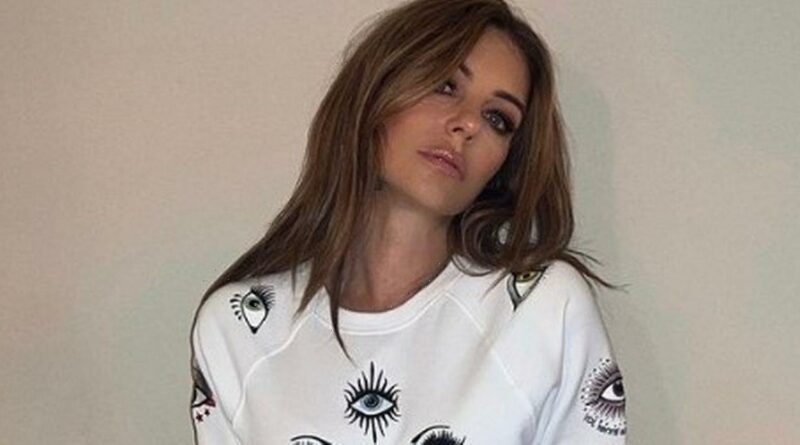 Liz Hurley has wowed her fans yet again with another sensational snap.

The 57-year-old actress shared a photo to her 2.4million Instagram followers as she showed off one of her Christmas presents sent to her by a pal – and by the looks of it, she's loving the new piece.

The jumped was filled with various different eye shapes all over and Liz opted to pair it with absolutely nothing as she seductively posed for the camera while tugging down at the material.

Liz showed off her thighs as she posed in front of a white wall and got the perfect shot for her Instagram.

Her brunette locks cascaded down her back as she opted for an incredibly glamorous makeup look with a smoky eye look and a swipe of nude lipgloss.

Captioning the photo, the beauty wrote: "Snuggling into my new Xmas pressie," before gushing over the fact that her pal Patrick Cox designed the sweatshirt.

Within an hour she had a whopping 30,000 likes on the racy snap as her pal Patrick wrote: "OMG – you've made my sweatshirt look soo sexy! So glad you like your pressie. Love you. Px."

Another pal added: "Oooh love it," while her fans also flooded to the comments to gush over her.

One person wrote: "Sweet, it looks so good on you!", while another added: "Beautiful as always Elizabeth. That sweatshirt looks great on you!"

Even her son Damian chirped in with a comment to tell his mum she looks "so good", in the jumper.

Liz has been sharing her dazzling snaps in recent weeks, particularly as the festive season rolled around and the starlet took part in a new Christmas film.

Joined by Billy Ray Cyrus and Kelsey Grammer, Liz's most recent film was Christmas in Paradise, which came out in November 2022 and saw Liz take on a starring role.

Her IMDB page is flooding with new film credits, with 2022 seeing Christmas in the Caribbean, The Piper and The Boy on the Beach added to her list this year alone.