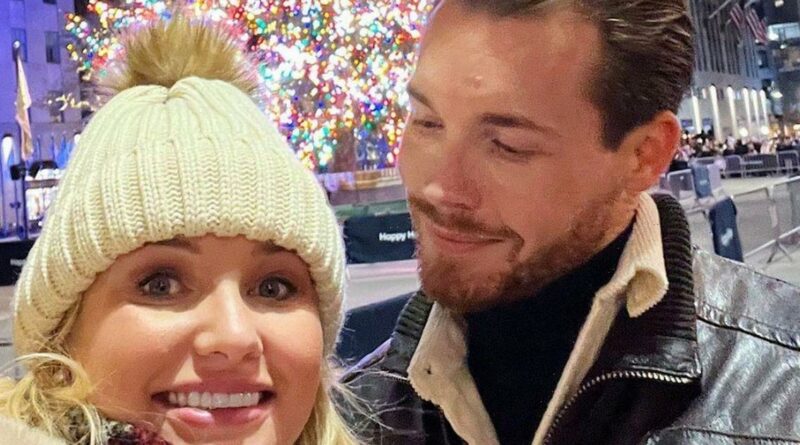 Amy Hart has been sharing heart-warming photos of her trip to New York with her boyfriend Sam Rason.

The reality TV star, 30, who is pregnant with the couple's first child, surprised Sam with a trip to celebrate them expanding their family, and to give him early birthday present.

Amy has been documenting the holiday she has dubbed a "babymoon" and sharing daily highlights of her five-day trip with her fans.

The Love Island star shared a slew of snaps, which showed landmarks from the iconic city, also also hosted a Q&A on her Instagram Stories.

In one post she wrote alongside a snap of Sam gazing at her as they stood by the Rockefeller Center Christmas Tree: "Last trip as a 2.

"Now it’s time to start prepping for a baby!"

Sam replied: "Such a magical trip. I was so so surprised to be going to #nyc. Massively tricked until the gate. Now we prepare to become a 3… So excited to be doing this with you."

Amy, who grinned as she posed for the snaps, wrapped up warm in freezing NYC temperatures in a white hoody, thick cream fur coat and white bobble hat.

She also shared a selfie snap of her and Sam on the observation deck at the top of the Empire State Building.

They also posed outside Radio City Hall, with the Statue of Liberty behind them, before enjoying a river cruise to the iconic landmark.

In the final picture they gushed over the stunning views at the One World Trade Center Observatory.

Amy had not told Sam where they were going on the trip until they arrived at Heathrow Airport when she told him which gate they needed to go to.

Sam was left stunned after being told where they were set to jet off to and Amy filmed his reaction and shared it with her fans as he said the surprise was "amazing".

Amy has since confirmed that it was her final holiday before she gives birth as she made the most of the relaxing trip.