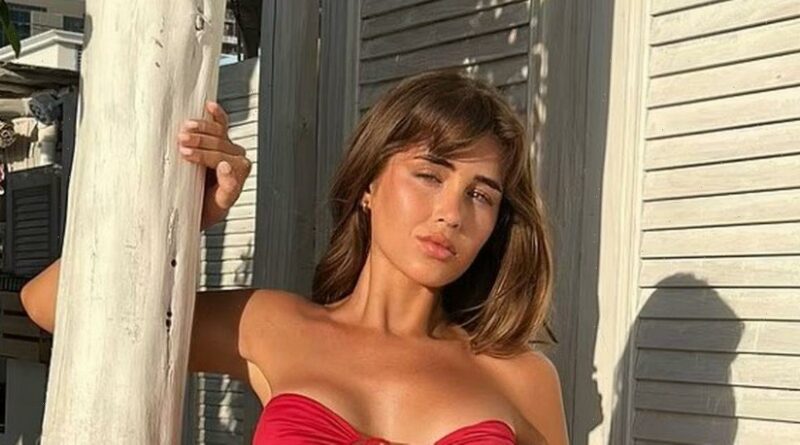 Former Love Island beauty Georgia Steel has left fans with their jaws on the floor after posing in a tiny miniskirt for an ultra racy snap.

Posing up a storm in a lavish marble bathroom, Georgia's brunette hair was blow-dried in a bouncy style with her fringe fluttering while framing her face.

Her nails had white tips and her makeup was natural and bronzed.

With one bum cheek sitting on the edge of the sink, Georgia showed off he peachy posterior as she snapped away in the large mirror.

Her hip was protruding outwards, her skirt was hiked up slightly which gave fans a glimpse at her bum.

In the caption the star penned: "Catch good angles not feelings."

Flocking to the comments section to gush over the racy display one fan penned: "You always look like a real life doll G xx."

Another added: "My dream woman!"

A third then swooned: "Good Lord! You are incredible."

While a fourth penned: "Cute little belly button," which referred to one of the snaps where her midriff was on full display.

Georgia made a name for herself and rose to national prominence in 2018 when she appeared on the fourth series of Love Island.

She has since made appearances on a slew of other dating shows like Celebs on the Ranch, Celebs Go Dating, Celebrity Coach Trip and Ex on the Beach: Peak of Love.

With over a million followers the 24-year-old TV star has a solid career ahead of her.

After starring in the 2018 series of Love Island Georgia went back to University to finish her studies.

She took a break from drama school when she went on the show, but completed her training as an actress at St Mary's University in August 2019 a year after her Love Island stint.

Before appearing on Love Island, she said that she "was a student making dinner off £2"