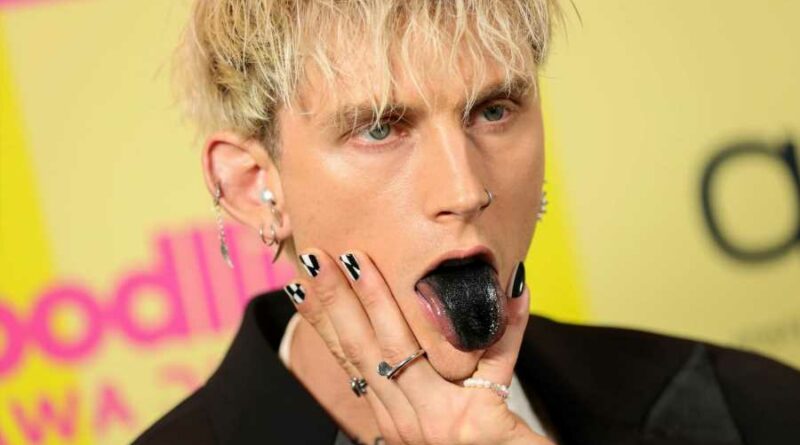 Machine Gun Kelly, hot off his red carpet “bout” with Conor McGregor at the MTV Video Music Awards, kept his fighting spirit alive by taking a few shots at Slipknot during their competing sets at Riot Fest in Chicago Sunday night, September 19th.

A fan-shot video captured MGK — a 31-year-old who recently dyed his tongue black — quipping in between songs, “Hey, you want to know what I’m really happy that I’m not doing? Being 50 years old wearing a fucking weird mask on a fucking stage, talking shit.” After a brief pause, MGK changed the subject, cracking, “So, anyway, what’s everyone’s favorite candy? Reece’s Pieces?” (For the sake of accuracy, only one member of Slipknot’s current lineup is older than 50.)

Per the Chicago Sun-Times, Machine Gun Kelly slipped in another dig at Slipknot, saying, “Turn the lights up. Let me see who chose to be here instead of with all the old weird dudes with masks.”

A rep for Slipknot did not immediately return Rolling Stone‘s request for comment.

Petty as MGK’s patter may have been, it’s possible it was prompted by an insult previously leveled at him by Slipknot frontman Corey Taylor. Back in February, Taylor appeared on the podcast, Cutter’s Rockcast, where he bemoaned the current state of rock music and appeared to take a swipe at MGK when he said, “I hate all new rock for the most part. Well, the ‘artists’ who failed in one genre and decided to go rock — I think he knows who he is. But that’s another story.”