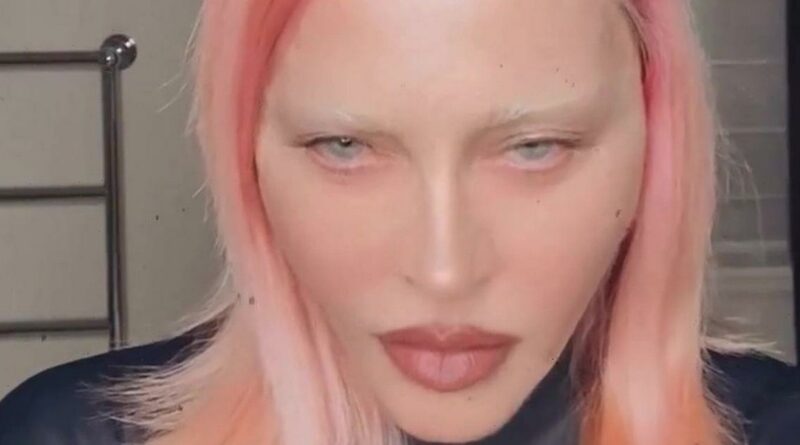 Madonna fans have expressed concern once again after the star posted a "disturbing" clip looking like Marilyn Manson.

The singer, 64, is no stranger to sharing debatable snaps and clips with her fans and this time, she simply stared into the camera for the duration of the video.

In the clip posted on her Instagram on Sunday (October 9), the Material Girl hitmaker donned a fitted black top and swept her pink locks into a side parting while sporting her regular bleached brows.

While several of her 18.5 million didn't know what to make of the clip, many of the comments were centred around the fact she bared an eerie resemblance to the Sweet Dreams hitmaker. Another echoed: "What in the beautiful people is going on here?!? Marilyn Manson?!?!"

Sharing the same thoughts, a fourth wrote: "Looking like Marilyn Manson at this point."

Others took to the comments to share their thoughts on the clip in general, with several citing it as "disturbing" and "scary." While many commented to share their excitement at the prospect of the Queen of Pop bringing out new music in the coming months.

The pop icon recently left fans baffled after "coming out as gay" in a recent TikTok video.

The mum-of-six filmed herself as she threw a pair of knickers into a bin but happened to miss.

Alongside the short clip appeared the words: "If I miss, I’m Gay!" The post racked up thousand of comments from her 2.8 million followers, with many debating whether this was a true revelation about her sexuality.

Madonna has only ever publicly dated men but has been spotted getting up close and personal with Dominican rapper Tokischa recently.

The star released a new remix of her classic hit Hung Up and the video contains explicit content and sexual scenes, including Madonna passionately kissing the 26-year-old.