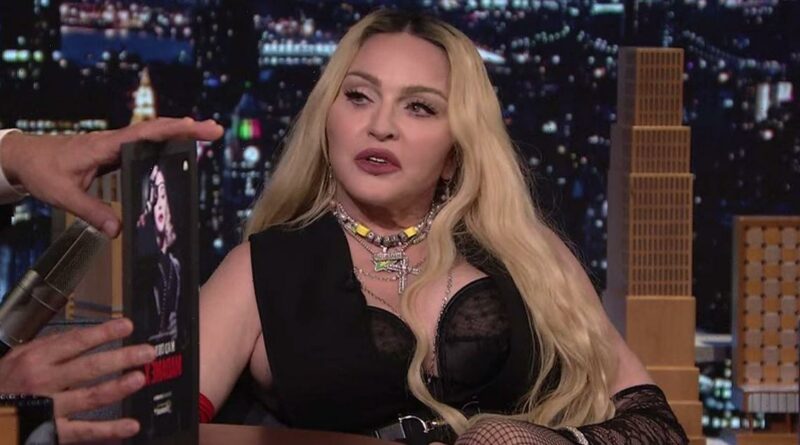 Madonna has stunned fans once again after pulling up her clothes live and showing off her knickers on a US talk show.

In a new clip from The Tonight Show, the 63-year-old singer can be seen gyrating on talk show host Jimmy Fallon's desk while he begs her to stop.

The Like A Virgin superstar leaps from her chair into full view of the audience after he tells her "oh, yeah, you get in good trouble!".

She then replies "No one's gonna see anything, my god!", before pulling up her dress to flash the camera.

While the crowd cheers and lets out audible gasps, host Jimmy laughs and winces, and then throws a jacket over her rear to cover her up.

Madonna can be seen wearing a black lace outfit reminiscent of some of her most famous '80s outfits, with long red evening gloves stretching up her forearms.

She sports her long wavy platinum hair down to her waist, with visible roots showing.

The bizarre appearance caused quite the stir on social media, and some have called the wild moment 'embarrassing'.

One Twitter user claimed it showed that Madonna's 1990s ex-boyfriend ex-WWE star Louie Spicolli had aged more gracefully than her, saying: "Madonna was such a trainwreck on Fallon. How crazy 35 years later Spiccoli would be the better person."

Another tweeted their disgust at her antics: "Madonna on Jimmy Fallon – uck. People can do what they want, but uck."

An audience member posting on the site, later on, offered some favourable words, however, commenting that "she is the definition of entertaining".

What do you think of the TV moment? Let us know in the comments below if you think it's Madonna being her wild self, or if the move was 'embarrassing'

In the pics, she can be seen wearing her hair in braids, and hugging her smartly dressed son.

She controversially adopted David as a baby on a visit to the African country of Malawi in 2008.