Home » Music » Maggie Rogers review: Dancing to the beat of her own drum

Draped in a blue gossamer shawl that transformed her from soulful mystic to uninhibited dancing queen, Maggie Rogers showed the Enmore a rollicking good time.

She kicked off with the teasing, clever pop track Give a Little from January’s debut album Heard it in a Past Life. The clarity and vocal restraint of “You don’t know me/I don’t know you” was somewhat lost in the belting energy of a heavier arrangement, but Rogers’ punchy dance moves more than made up for it.

She boogied her way into the joyous falsetto at the heart of Burning and backed that up with the hit On + Off and the flirtatious Say It. Her sashaying, regal presence was only magnified by the echoing recorded backing tracks, which kept the songs grounded in their folky roots. 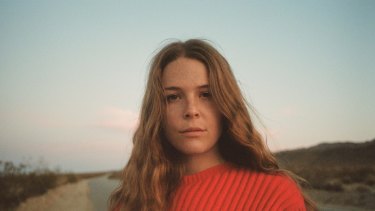 Accompanied by a four-piece band, she both celebrated those “banjo girl” origins and powered through hits packed with electro currents and dance-floor-filler synths.

Comfortable, rolling verses built to a crashing crescendo in Back in My Body. Her strange brand of reveller folk – as if it was mixed to play at a disco-rave in the forest – is a crowd-pleaser.

And it would be remiss not to mention the extraordinary lighting, styled with such rhythm that the flickers worked to give the same effect as a group of back-up dancers perfectly in sync.

Later, Alaska traced the course of modern heartbreak and the in-between spaces of love, and felt like a slap of mountain air, while in Light On she sang about her ascension to fame, disguised as an ode to a love affair left open-ended: “If you leave the light on/I’ll leave the light on.”

She could have probably stayed still and let us bask in the majesty of her voice, but she danced her heart out the whole time.

The syncopated beats that began Fallingwater, her big air-punch of a closer, played out a similar build-and-release formula, woven through with ethereal imagery and rounded out by a solid, infectious drum line.

A crowd as besotted with Rogers as on this night wasn’t going to let her slip away without an encore. Old favourite Colour Song felt like a lullaby, just her under a spotlight. Even when the arrangement fell away, she was the vision of glorious, unbridled energy.

Maggie Rogers plays at the Opera House Concert Hall for Vivid Live on Wednesday, May 29.