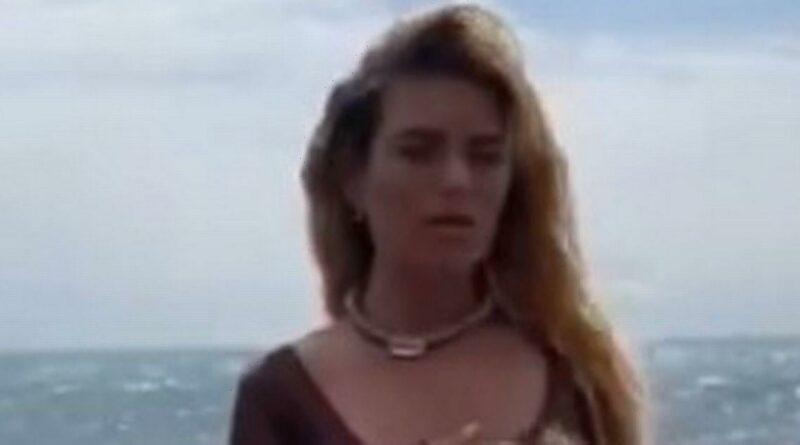 The star was seen posing on the beach in numerous outfits as her photoshoot was videoed.

One of the outfits was a jaw dropping see-through mesh top which meant that Megan had to cover up her nipple to not expose herself to the camera.

Megan partnered this outfit with a red sarong and a shell necklace as she enjoyed the holiday vibe.

In the video of the photoshoot Megan was also seen wearing a stunning denim number as she wore blue denim leg warmers and a matching denim top.

Her stylist Anna posted the video to her feed and captioned it: "BACKSTAGE from that hot shooting in Marbella" before naming all the artists involved in the shoot.

Fans instantly took to the comments section to praise Megan for her bold looks.

A third said: "omg the jeans on the heels where i can get it."

Megan often puts on eye popping displays that shows off her ample assets as just last week the star thrilled fans with a racy reel she posted to her Instagram.

Megan could be seen posing up a wall while wearing a revealing pink cut-out top and denim short shorts.

Over her shoulders, she wore a patterned kimono and went for a cowgirl finish with some white boots.

The stunner styled her fair down in loose waves with a subtle smoky eye and a pink lip.

She captioned the post: "Happiest in the [sun emoji]."

Friends and fans flocked to the comment section to support the star, with one writing: "Wow girl."

While a third penned: "God you are so bloody beautiful."

"That's a really beautiful video!" a fourth shared as a fifth joked: "No cost of living crisis for MB."

"What a beautiful stunner," remarked another.

Megan starred in season 4 of Love Island and has soared to fame since.

She has told fans that using body oil gives you a “juicier butt” and budding models should get creative with the location of photos.as recently spoken out about her OnlyFans account with her followers in a Q&A online.

However, she told Vice magazine how male models often fail and said: “For some reason, men don’t always look at what’s around them in a thirst trap, and that can be so off-putting.

“You can be super well hung, but if the bed is unmade and you’ve got crusty boxers on the floor then you’re already down in my estimates.”