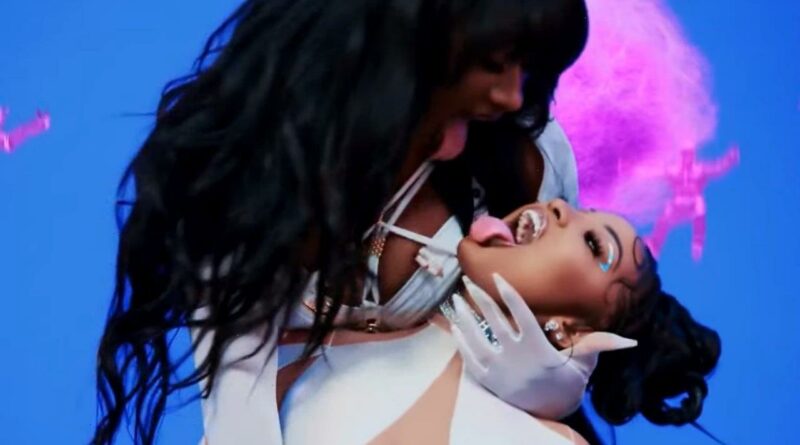 The track, which is produced by Murda Beatz, is the first single of the Jamaican singer’s upcoming debut album ‘Alpha’, which is set to be released on March 11.

AceShowbiz –Megan Thee Stallion and Shenseea‘s new collaborative track and its music video are finally out. In the NSFW song, the Grammy-winning female rapper and the Jamaican native teach men how to “Lick”.

The visuals, which was released on Friday, January 20, shows the 25-year-old beauty singing around flying popsicles in a cotton candy dreamscape. The clip also features some scantily-clad women dancing and twerking on the top of ice cream cones.

Megan later joins in as she raps, “Bust it open, bend over, put my back in it/ He addicted like it got a little crack in it.” The “WAP” hitmaker continues, “Suck it like a crab leg, I’m cracking it/ Take it out, catch your breath, get back in it.”

The Murda Beatz-produced track arrived one day after Shenseea and Megan shared its cover art. In the photo posted on Instagram, the two musicians bent in front of each other while letting out their tongues.

The “You’re the One I Love” songstress and the “Hot Girl Summer” raptress rocked pink, purple and yellow costumes in the snap. The dancehall singer, meanwhile, completed her look with yellow fishnet stockings and canary yellow wig. As for the “Good News” artist, she accessorized her style with jewelry.

In the accompaniment of the post, Shenseea exclaimed, “Get ready!! We gonna go crazy this FRIDAY! @theestallion.” The singer, who previously contributed to Kanye West‘s “Ok Ok pt 2” and “Pure Souls” from “Donda”, then added hashtags, “#shenyengz #hotties.”

“Lick” serves as the first single of Shenseea’s upcoming debut album “Alpha”. The record is set to be released on March 11 via Rich Immigrants/Interscope.