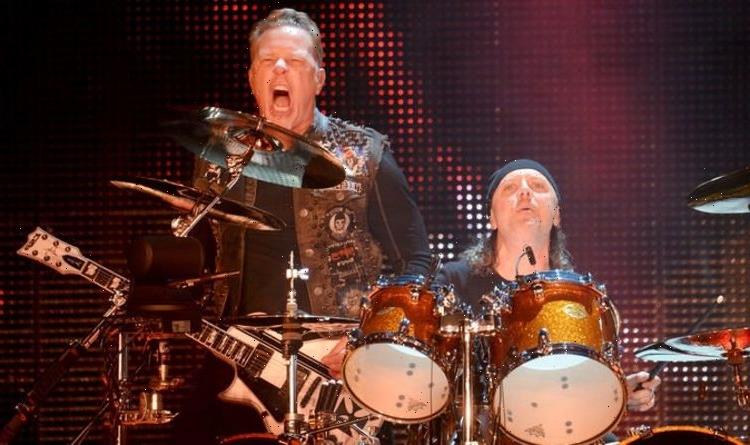 Metallica perform 'Battery' on The Late Show with Stephen Colbert

Legendary metal band Metallica have released a staggering amount of songs over the 40 years they have been active. Because of their enormous song catalogue, they have a lot of tracks to choose from to place in their live show setlists. Ulrich has now revealed that this leaves the band under-prepared during their gigs.

The drummer recently explained: “We pride ourselves on, obviously, going deep, but there are some songs – Enter Sandman, Master of Puppets, One – that are kind of mainstays of the set.”

These iconic songs from the American band are obviously too powerful to remove from their setlist – but the rest of their songbook is flexible.

With this in mind, Metallica decided to change up their setlist every single night while on tour.

He said: “We took the dare all the way to the finish line and didn’t repeat any of the songs.

“So, I guess, we were 34 songs in by the time we were done, which was super. It was super fun, but I’d be lying to you if I said it wasn’t challenging.” (Via The Eddie Trunk Podcast)

Ulrich went on to reveal how he and the rest of the band play with “the moment” more than they do from pure rehearsal.

He said: “I think anybody that knows us well knows that … it’s a bit of a high-wire act.

“We’re always 10 percent under-rehearsed. The energy of the moment, you feel like you’re really f*****g in the moment with the rest of the guys in the band and with the audience.”

Lady Gaga and Metallica have mic issues during GRAMMYs

Ulrich did reveal there is a downside, however.

He went on: “If you lose your focus, falling off the high-wire… it also makes it feel sort of more alive or more real or more just kind of crazy-cool.”

The musician then spoke candidly about how playing new songs each night keeps the band enticed in their job.

The 57-year-old said: “I don’t want to get on my high horse here, but certainly the live, dangerous element has been missing a little bit [from the music scene].”

Earlier this year the drummer revealed the band is working on a new album over the past couple of years.

He said: “It’s going to be the best album we’ve ever done! Insert the rest of the clichés – it’s the heaviest thing, the coolest.

“But all kidding aside, if it wasn’t because we thought that the best record was still ahead of us, then why keep doing it? In Metallica we love the creative process, and it’s hard for me to imagine that we’ll ever stop making records.