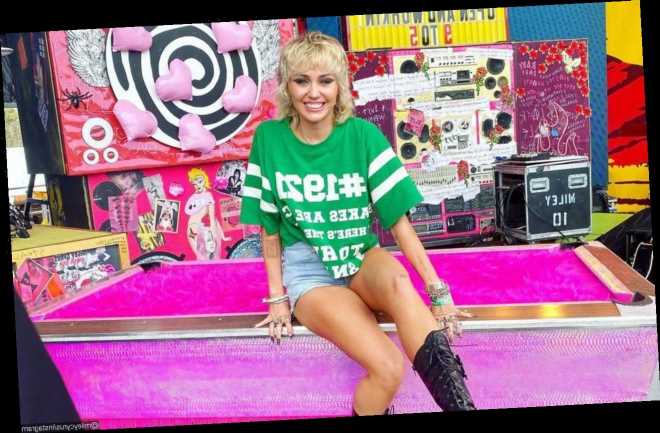 In addition to the ‘Wrecking Ball’ hitmaker, the Verizon livestream show is hosted by Tiffany Haddish and features sets from Brittany Howard, Christina Aguilera, Brandi Carlile and Luke Bryan.

AceShowbiz –Miley Cyrus kicked off the first “Big Concert for Small Business” by covering Mazzy Star‘s “Fade Into You” after the Super Bowl on Sunday night (February 7).

The pop star, who headlined the first TikTok Tailgate gig before the big game, joined Alicia Keys, Tiffany Haddish, and Eric Church and Jazmine Sullivan, who teamed up to perform the U.S. National Anthem at the Super Bowl, for the Verizon livestream staged to shine a light on small business owners affected by the COVID-19 pandemic.

It wasn’t the greatest event for host Haddish, who struggled with a series of technical and production issues.

After introducing H.E.R., the cameras stayed on the host and she was given teleprompter notes to keep talking, which she didn’t understand.

“What the f**k does vamp mean?” she scolded as a voice off camera said, “Stall”.

“Now they asked me to vamp. I don’t know what vamp means. To me, vamp means be a vampire and/or vampirate like slowly disappear and/or elaborate. Maybe that’s the word they should’ve used? Elaborate. But let’s continue on guys.”

Later in the broadcast, Haddish added, “This has not been the smoothest running situation. Every time an act leaves the stage, they have to clean the whole stage, get all-new microphones, all new everything you have to keep in mind that some of these acts haven’t performed for nobody…”.

“Me personally, I’m in a studio alone, it’s cold, and I’m ready to bring the heat. But it’s cold.”