Home » Music » Music reviews: Florence and the Machine, Gorillaz, the Rubens and more

INDIE ROCK Florence and the Machine 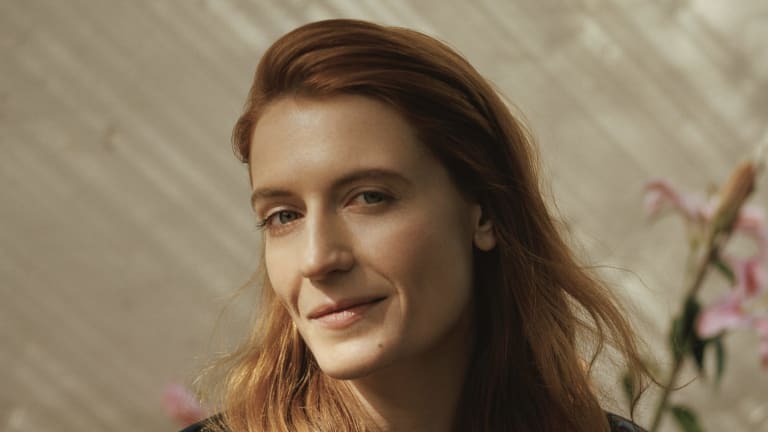 Florence Welch: An intimate, exciting connection with the epic.

Florence Welch, the English singer-songwriter whose burgeoning passion drives Florence and the Machine forward, has an intimate, exciting connection with the epic. Some artists trade their clarifying traits for greater scale as their career progresses, but Welch has always come into focus as the surging bridges and grand choruses of her songs take hold: the individual burns through the panoramic sweep. Having triumphed against heartbreak on 2015's elemental How Big, How Blue, How Beautiful, Welch takes stock on the group's fourth studio album. "At 17 I started to starve myself/I thought that love was a kind of emptiness," she remembers on Hunger, but if the memories – of lost friends, alcohol, and past relationships – are unvarnished, they still make for soaring, gospel-tinged ballads such as Grace. When she looks forward (the piano chords and strings on the Patti​ Smith homage, Patricia), Welch makes the seeking of a connection an ecstatic act – one reinforced by the playing and arrangement contributions of saxophonist Kamasi​ Washington. On the closing No Choir Welch worries that contentment is uninspiring, but the song – and the album – suggest otherwise. CRAIG MATHIESON

Among Australia's many jazz exports Linda May Han Oh shapes up as the one to have most thoroughly infiltrated the New York scene's labyrinths. Born in Malaysia and raised in Perth, Oh moved to the Big Apple in 2008, and now finds herself the bassist of choice for an array of artists including Pat Metheny​ and, here, Sound Prints, the quintet co-led by saxophonist Joe Lovano​ and trumpeter Dave Douglas, joined by pianist Lawrence Fields. You can hear why they want her. In tandem with brilliant drummer Joey Baron she makes the grooves like slingshots when they need to be, while generating something of the sonic heft and chunkiness of Dave Holland, and soloing​ with authority. I've often found Lovano's​ work (outside of the late Paul Motian's​ great trio) oddly detached, but here he is at his best, his tenor broad and woolly as it sprawls across the grooves, while Douglas is the perfect foil with his slicing incisiveness of sound and ideas. The material, in addition to originals by the leaders, includes two of Wayne Shorter's incomparable pieces, and it is gratifying to see Shorter's work being revered in a way that Monk's and Mingus's​ was before him. JOHN SHAND

Damon Albarn​ is not a man short on ideas. It probably explains why The Now Now, his sixth studio album with animator Jamie Hewlett as Gorillaz​, comes just a year after their last, but this is a more uniform, less boisterous record that Humanz​. Albarn​ has cut back on the collaborators, and while it's still undeniably fun to hear Snoop Dogg's​ guest verse on Hollywood, it would have been a fine hip-hop/pop song regardless: a slowed-down, sardonic, very Gorillaz​ number that keeps the mood bright and bouncing, even as Albarn​ does his downcast half-sung thing over the top. It's the closest song to a true banger here, and while we do miss those Demon Days, this is a record of quieter, more unassuming highlights, from the loungey​ funk-blear of Sorcererz​ to the luxurious, instrumental dream-pop of Lake Zurich to the wistful Fireflies, the squelchy​ bass lines of which anchor lush chords standing in for Albarn's​ elusive dreams. "I was only ever chasing fireflies," he sighs. Much of this album was reportedly written while touring Humanz​ last year, to pad out Gorillaz​' live set. It's to Albarn's​ credit that, while understated, these inventive, rather lovely songs are far from filler. ANNABEL ROSS

Laurence Pike has said that his "goal is to get into a space where the music makes itself", and no musician can have higher aspirations. That he reached this zone during a single day in a recording studio to make this album can be heard note by note, as cohesive conceptual ideas collide with equally cohesive improvised ones, generating enthralling interaction between sounds known and unknown, all emanating in real time from a guy sitting at a drum-kit. Okay, he uses electronic treatments and sometimes his sampler pads create harmonic and melodic contexts for the percussive work, but it was all the fruit of his imagination in the moment, without leaning on the hindsight perspective of post-production. These six works are not "drum-solos" in any sense that most people will understand that term. They are one-act dramas; short films in which you supply your own images; stories. The wonder of Pike's work has nothing to do with the brilliance of playing per se, but that, in real time, he heard and realised six complete musical experiences that keep the listener transfixed for 40 minutes – often (as the title suggests) in a rather spooked state! JOHN SHAND

In the post-streaming era of the Australian music industry, indie bands do not make financial sense any more unless they really hit it big. The members of your favourite new band in 2018 inevitably have day jobs, because streaming just doesn't bring in enough money to support a five-piece group. The Rubens are the exception that proves the rule: they only gave away the day jobs after they hit the top of the 2015 Hottest 100 with Hoops. Of course the curse of crossover appeal is that tastes are fickle: 2015's "alternative enough for Triple J, but pop enough for the mainstream" often ends up as 2018's "not alternative enough for Triple J, not pop enough for the mainstream". Lo La Ru's soul-inflected indie rock – the standout track I Know, or the single Million Man, for example – is pleasantly melodic, often with a good sense of groove, and tastefully recorded. It also feels a little timid, however, as though this is a band trying to please everyone, rather than a band making a stand with fire and authority. All of which means that in six months we'll probably be hearing these songs on ads for cars and health insurance. TIM BYRON

There are two elephants in the room and their names are Simon and Garfunkel​. No one's saying it's easy writing melancholy folk songs using acoustic guitar picking and warm, whispery​ harmonies, without somehow echoing the form's pioneers. But the Milk Carton Kids are four albums in and no closer to putting distance between themselves and the short bloke with the guitar and the frizzy-haired dude with the high voice. Despite the advance press emphasising the recent life changes that Kenneth Pattengale​ and Joey Ryan are mining – fatherhood, a break-up, cancer – and the fact that this is the first time the duo has used other musicians, it's business as usual. And with their vocals still soft, sweet and in sync, like two sparrows coasting on a spring breeze, it's wistful, pretty business. They do ever so gently nudge the envelope (no pushing here) on the 10-minute Americana epic One for the Road, which strives for a sweet spot between Midlake's​ harmonic uplift and Ry Cooder's​ wide-plains-drifter atmospherics. And Mourning in America addresses the US's malaise over sweeping strings and plangent piano. But it's a fine line between limpid and limp, and these Kids sway along that divide. BARRY DIVOLA​