THE FUTURE AND THE PAST (ATO/PIAS) 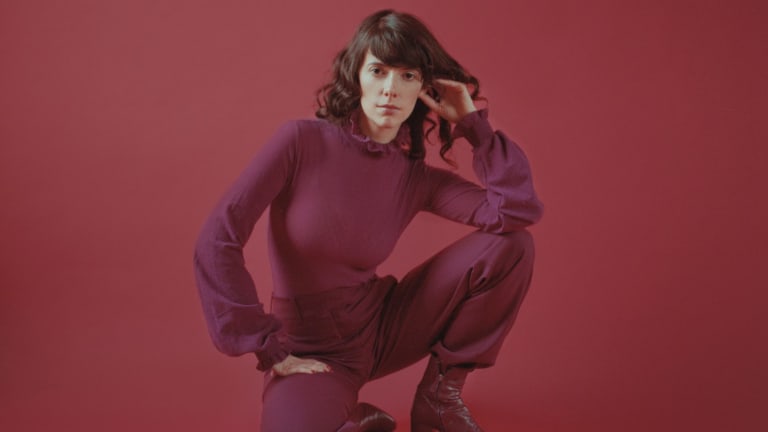 If you bravely stuck with Vinyl, the much-maligned TV series about the '70s New York music scene, you would have seen Natalie Prass do a cameo as Karen Carpenter. The US singer-songwriter does bear an uncanny resemblance to the late Carpenter, but she also shares a crystal-cut voice that speaks volumes beyond its contained delivery. On this, her second album, Prass makes the connection obvious on Far From You, a plush piano ballad that provides the dark flipside to the Carpenters' Close To You, as she trills the line "Tell me why do birds, do they suddenly disappear?" Prass once again teams up with producer Matthew E White and, while they conjure up some vintage soul-pop that updates Dusty In Memphis to become Natalie In Richmond, Virginia, this is a more modern take on her signature sound. The creamy vocal harmonies, clucking guitar, whistling synth and repeated high-pitched "whoo!" throughout Short Court Style marries Janet Jackson funk to Chic disco. And Sisters manages to be both a feminist anthem and a jazz-flecked soul-stormer, with a massed refrain of, "I want to say it loud for all the ones held down, we gotta change the plan." BARRY DIVOLA

Christopher Young has a gift for crafting charged atmospheres in which to improvise. This gift is especially prominent on this double album's 20-minute centrepiece, the slow, dreamy Out of Time, which has minimal harmonic movement, instead using layers of post-Robert Fripp guitar played by guest Brendan Hains, whose long, sustained notes frost with tension the improvisations from Julien Wilson's tenor saxophone and Young's bass clarinet. This sharp edge of anguish is passed between clarinet, saxophone and guitar, without either the effect becoming overwrought or its impact diminishing. Meanwhile bassist Alistair Watts and drummer Daniel Brates maintain a soft, restrained, but nonetheless buoyant dialogue to keep the piece afloat. It is among the most compelling works I've heard this year, and amazes me afresh with each hearing. The rest of the album keeps you in its grip, too, with Young developing such full-blooded sounds on his saxophones, clarinets and flute, and his compositional ideas asking different questions of himself (sometimes multi-tracked) and his collaborators. Wilson's brawny tenor also guests on There Is Always a Way to Know and trumpeter Tony Norris spices up Eternity. JOHN SHAND

As Kendrick Lamar told Billboard magazine, "Jorja [Smith] is a constant reminder that true artistry, writing and creativity will forever be alive and well. She is the future and present." Following collaborations with Drake and Kali Uchis, the 20-year-old English singer releases her much anticipated debut album, a record that is both dreamy and elegant, toeing the line between jazz and R&B with the sophistication of an artist decades her senior. Smith is at her best when she lets her hazy vocals seamlessly slither along the downtempo beats, making for melancholy moments on Don't Watch Me Cry and Goodbyes. The soundscapes on The One are monumental, while Blue Lights and Teenage Fantasy leave the listener drunk on melody and nostalgia in a way that is not unlike a young Lauryn Hill. Lost & Found is a debut that sets out to make a mark, and the combination of new and old sets the tone for what might come next. Still at the beginning of her career, Jorja Smith already commands her position in R&B like a seasoned musician, but it is her youth and innovation that will see her soar. KISH LAL

Josh Tillman's schtick as Father John Misty is all about the surreality of being self-aware in a world where every artistic choice feels as if it is some cliched trope. Like Elton John, Josh Tillman has a predilection for soulfully sung, piano-led songs with Beatles influences. As a listener, however, you question Tillman's motives both when he wants you to laugh and when he wants you to cry. Perhaps this is best encapsulated in The Palace, where he sings a tossed-off line meant to be silly – "last night I wrote a poem/Man, I must have been in the poem zone" – and then immediately follows it with a soaring heartfelt vocal: "I'm in over my head". Thematically, God's Favorite Customer is a sober reflection on a marriage falling apart after the honeymoon period of 2015's I Love You Honeybear. On 2017's Pure Comedy, which forefronted political themes, Tillman came across as arrogant, often missing his comic targets. Here, with himself as the target – on the lead single, Mr. Tillman, he paints himself as a dissolute wastrel with only a dim connection to reality – his feints fool and his punches connect. TIM BYRON

The girls-to-the-front movement has shone a light on artists who may not have received mainstream attention previously, but, as is the case with US singer Lindsey Jordan (aka Snail Mail), the "female singer" tag can actually diminish the attention this stunning debut deserves. Openly wearing her heart on her sleeve, she also wears some influences – Death Cab for Cutie, Rilo Kiley, Nada Surf, for example – there. Nonetheless her debut is hard to fault, given she delivers her songs with heart that belies homage and a maturity beyond her 19 years. The '90s influences are unmistakable, but Jordan marries the Pavement-esque guitar on Pristine with honest lyrics ("Don't you like me for me?", "It just feels like the same party every weekend"), and continues the youthful apathy on Heat Wave ("Spending every weekend so far gone") and Full Control ("Wait for you and then waste my time"), the latter starring those endearing, happy-sad Nada Surf vibes. Jordan's delivery and arrangements, meanwhile, are at once comforting and melancholic, as she speaks with a voice that transcends her generation – as the most powerful music should do. She's still in a niche, but her beautifully bleak musical future looks bright. BRONWYN THOMPSON

Kanye West's music has always corralled and clarified the contradictory multitudes of his public persona. His songs – thrilling, confessional, and transformative – made sense where his pronouncements never could. That continues on Ye, but it's a close-run contest. The Chicago rapper and producer's eighth solo album is uneasily balanced between braggadocio and withdrawal. There are still verses where he gloriously upends the narrative ("ain't no disability," he says of his bipolar disorder on Yikes, "I'm a superhero"), but Ye has a degree of wary fortitude that's present from the opening monologue about mental health on I Thought About Killing You. West is still convinced of his exceptionalism, but he's not as driven to project it. There is little of his maximal production; instead he emphasises his ear for soulful samples and masterfully arranged gospel vocal parts. There's a Stormy Daniels reference – but no hint of Donald Trump – on the abrasively sparse All Mine, and even when he's assertive West is rarely confrontational. At seven tracks and 23 minutes the record is concise. It's also beholden to his family only and intimately genuine. Even in recovery Kanye West holds nothing back. CRAIG MATHIESON