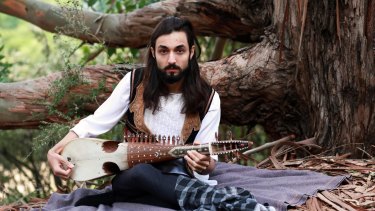 Quais Essar: making music that wraps itself around you.

I AM AFGHAN, AFGHANI IS CURRENCY VOL III – ZAHIR (Worlds Within Worlds)

This year marks 40 years since the first US arms shipment to Afghan Mujahideen rebels, soon followed by a full-scale Soviet invasion and the descent of Afghanistan into unending catastrophe. Today images and recordings from the '60s and '70s are reminders of the glory days of "Swinging Kabul", with its modern architecture, fashion, music and a strong secular cultural-intellectual tradition. Here the Arizona-based Qais Essar, who describes his music as "a sonic time portal from the ancient Hindu Kush to the modern era", celebrates two beloved singers from that era, Taranasaz and Elvis lookalike Ahmad Zahir, with instrumental re-imaginings of some of their hits. At first the palette of sounds seems very Indian, largely due to instrumentation that includes rabab (a lute-like antecedent of the sarod), tanpura and tablas, but the melodies sound much more Persian, even Western, with influences that include American artists such as Terry Riley, Steve Reich and Ry Cooder. Essar's rabab takes the vocal parts, while the other instruments simmer and weave their lush, cascading textures. This is timeless, spellbinding music that wraps itself around you, and won't let go. EUGENE ULMAN

CUZ I LOVE YOU (Atlantic)

Just a few days into 2019 Lizzo sprang her first hit upon the music world – and Juice is likely to remain one of the year's most popular songs. This keenly-anticipated debut album is packed full of energy and empowerment, and plays as if the up-and-coming Minneapolis singer is performing directly in front of you. Lizzo balances retro, feel-good tunes that would have been perfect for an '80s disco with self-empowerment anthems like Soulmate, praising the woman "in the mirror". The album kicks off with a powerful a cappella that is swiftly backed by burly band and playful piano accompaniment, and then builds into a universal affirmation about the confusion of love. The album's buoyant sound is stripped back for Jerome, on which a slow percussive beat and almost mocking vocals tell the story of a one-way love. With Tempo, however, the record completely shifts. The electronic rhythm features Missy Elliott, and looks back nostalgically at 2000s hip-hop, with a sticky, deep baseline and repetitive lyrics. After a powerful range of songs, the album closes on a surprising note: Lingerie, underpinned by a seductive R&B groove, is stripped-back, delicate and sensitive. SIMONE ZIAZIARIS

If Stealing Sheep's second album, Get Real (2015), saw them toning down the psych-folk flavours of their brilliant 2012 debut, Into The Diamond Sun, this third one has them jettisoning that moody, "pagan" feel entirely, in favour of a highly melodic, consistently up-tempo brand of avant-pop. The Liverpudlian three-piece, made up of Emily Lansley, Luciana Mercer and Rebecca Hawley, have crafted a dazzlingly colourful (to the point of garish at times) record, with a heavy reliance on synthesisers and electronica-tinged production. This ties into an overarching lyrical theme of the digital age and its impact on our perceptions of reality and identity, although a couple of the best songs – such as Why Haven't I? and the title track – fall back on the relatively safe terrain of romance. Big Wows recalls fellow Brits Django Django in its combination of exuberance, wit, and sonic ambition (the two bands share the in-demand Italian producer Marta Salogni), although with a slightly more computerised feel. Because of this, some listeners might find the album lacks the warmth of Stealing Sheep's previous two, but its boldness and sincerity cannot be doubted. BARNABY SMITH

As Chris Potter approaches the 200-album mark, it becomes ever more apparent that the saxophonist's most profound work occurred in his decade with Paul Motian – but that's like saying a fine actor's greatest role was Hamlet. What I like is the range of "roles" Potter is prepared to assume, and Circuits is a whole new theatre of sound to kick off his relationship with the Edition label. Recorded with sparkling presence, it has Potter returning to more groove-based material, amid bold textural decisions, compositional complexities and wide-open improvising. The textural boldness includes Potter multi-tracking his array of reeds on occasion, and keyboards player James Francies supplying anything from electronic hazes to lyrical piano to synth bass – electric bassist Linley Marthe only appearing on four of the nine pieces. A key to the music's success is drummer Eric Harland, who, like Billy Kilson, can blend precision, dialogue, groove and drama into a startling series of underpinnings and foreground jolts. Potter's multi-tracking creates its own dramas of harmony and timbre, although the music is at its most gripping when that golden-toned tenor is flying across Harland's jet propulsion. JOHN SHAND

Gautier Capucon is a wonderful cellist: sensitive, supple and polished, with his beauty of tone evident throughout this generous album (of more than 78 minutes). These works are at the lesser-known end of Schumann's output, and all the more valuable for that. All five pieces are live, which is a bonus because of the intimacy and immediacy of the recording, and Capucon's partners are illustrious. Schumann never heard his cello concerto, a lyrical and unostentatious work which receives a sympathetic and warm accompaniment from the Chamber Orchestra of Europe under Bernard Haitink. The other four pieces are live performances from Martha Argerich's Lugano Festival from 2009 to 2012, and again the great Argentinian pianist has a sensitive and rewarding relationship with the French cellist. Together they play the Adagio und Allegro, Op 70; Fantasiestucke, Op 73, Funf Stucke im Volkston, and, joined by older brother Renaud Capucon, the Op 88 Fantasiestucke for piano, violin and cello. I confess to being irritated by the cover and liner notes having copious, self-indulgent photographs of the handsome cellist as a brooding 19th century romantic hero. A minor quibble, though. BARNEY ZWARTZ

The rebellion du jour of teenage musicians is oft-praised as fresh and exciting, but as a veteran of raising a proverbial middle finger to the world, Pink remains one of its originators. Returning with her eighth studio album, she continues to subvert expectations of pop with tender accounts of heartache and a formulaic collection written with the industry's biggest names, including Max Martin, Sia, and pop darling Teddy Geiger. Her voice soars alongside sweeping melodies designed to bellow and suck the air out of any stadium, but each song feels incomprehensibly empty. Whether it's the anthemic and titular message of Courage, the stripped-down acoustic refrain of Khalid collaboration Hurts 2B Human or the cynicism of Happy (which mimics the sorrowful nostalgia of Lukas Graham's 7 Years), Pink's message becomes lost amongst the frivolity. Despite this, the record is impeccably produced fan service. As she expertly coos on country-tinged ballads (Love Me Anyway), the seams of the perfectly sutured album are exposed with banal lyrics that feel more rehearsed than raw. Pink is one of the industry's most polished stars, but on this album fails to show her humanity. KISH LAL