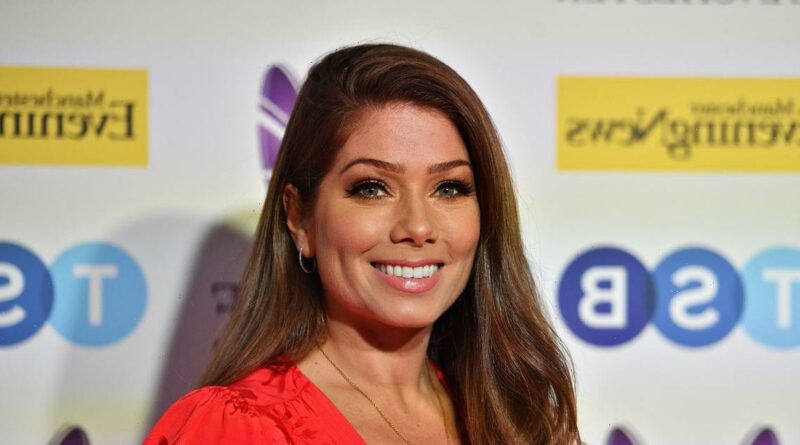 Hollyoaks star Nikki Sanderson set pulses racing on the red carpet in a plunging mini dress as she stepped out for the Pride of Manchester Awards.

The soap babe, 38, was racy in red in the lowcut frock that risked a serious wardrobe malfunction.

Nikki showed off her endless legs in the thigh-skimming design that featured delicate floral accents and buttons all down the front.

She accessorised with a delicate gold necklace while wearing her brunette tresses in loose waves and opting for a glam makeup look.

Katie McGlynn, Kym Marsh and Coronation Street 's Lucy Fallon were among the famous faces putting on glamorous displays at the Awards show.

Former Corrie star Katie, 28, looked incredible in a strapless black top with a sheer detail that she wore with a matching pair of trousers.

The actress, who most recently appeared in Hollyoaks, went braless in the garment while she also wore a pair of matching heels while she added to her outfit with a white clutch bag.

Lucy, 25, looked sizzling in her red silk dress which had a dramatic thigh-split and was teamed with a black bag and chunky heels.

Kym, 45, posed confidently in her bright blue dress that had statement shoulder pads and was teamed with a silver clutch bag and heels to boost her height.

She wore her dark tresses pinned up on her head in a chic up do while beaming for the cameras.

The awards are hosted by Kym and the evening will honour Manchester's unsung heroes for the amazing things they do to bring together and nurture the city's communities.

It comes after Kym attended the Pride Of Birmingham Awards with her ill father Dave and mother Pauline.

Kym revealed her father's cancer diagnosis in June last year as she praised her 'close' family for helping each other through the awful news.

She admitted: 'It has been a very difficult time… The reality is that in Dad's case it has now spread to his pelvis, spine, ribs and left leg, which is of course bad news.

The actress continued that doctors are 'talking about it being incurable' but also treatable and hope to extend her dad's life.

In an emotional clip Kym broke down in tears as she spoke with her father after his incurable prostate cancer diagnosis.