"Tonight we're going to play some old songs and some new songs," said Middle Kids frontwoman Hannah Joy to the sold-out crowd at the Corner on this chilly Wednesday night. "I don't know if we can say 'old' just yet, but we're getting there." 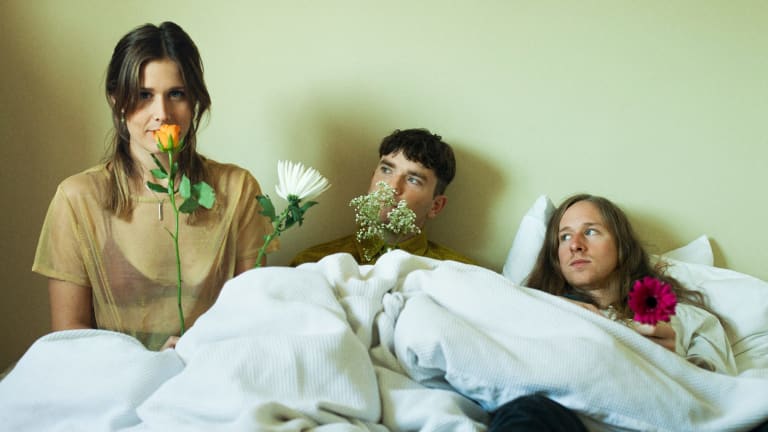 It's true there isn't much old material to be played since the Sydney three-piece made a splash with last year's self-titled EP, bolstered to a 12-track debut, Lost Friends, released this month.

Joy's classical training and haunting, Sarah Blasko-meets-Stevie Nicks vocals shone as she swapped glances with bassist (and off-stage partner) Tim Fitz. She owned the stage with a hunch-shouldered swagger, projecting the confidence of a band enjoying its moment.

Triple J favourite Edge of Town had phones in the air early in the set (Elton John is apparently a fan) as the twenty-something crowd quietly rocked out to the infectious chorus. Guys in matching Smith Street Band T-shirts gave each other bro-hugs, cool nerds in round, wire-rimmed glasses mouthed the words intently.

There was a sense of recent nostalgia to many of the tunes: from Blondie-style guitar riffs to Cranberries vocals, Arcade Fire anthems, Tori Amos ballads and the '90s slacker vibes of the Breeders.

New single Mistake is anything but, showing why the band was picked to play the track on US talk show Jimmy Kimmel Live! in April.

There is clearly potential for international success; Joy is a clear-eyed, charismatic lead with a powerhouse voice and a down-to-earth stage presence.

"It doesn't matter who you are or where you come from, you belong here," she told us. "We feel so privileged to share the power of music with you."

A surprise encore requested by a fan in the crowd – a reflective cover of All The Small Things by Blink 182 – was enthusiastically received, although many in the room were barely eating solids when the original was released in 1999.

The gig closed with the stadium-ready standout Never Start, a brittle sleeper hit which the group doesn't seem to tire of performing, yet. It will be interesting to watch the band as they grow up and add even more old songs to their impressive set list.