Talk about a rough night out. DMA's were in Torino, Italy, towards the end of the touring cycle for their debut album, 2016's Hills End. An album recorded in the apartment of guitarist Johnny Took, its blend of pop hooks, indie rock and Oasis-style attitude had extended the band's profile beyond their inner-western Sydney home, leading to performances at festivals such as Glastonbury in Britain, Japan's Fuji Rock and Coachella in the US, and on late night TV in America. It also lodged them in the upper reaches of the ARIA charts, where the album debuted inside the top 10.

Such success does not, however, bring with it luxury, and so it was on this particular evening that the trio (they swell to a sextet on stage) found themselves playing a show in one of Torino's less salubrious neighbourhoods. At one point, Took and touring drummer Liam Hoskins were held up at knifepoint, while in a separate incident, touring guitarist Joel Flyger also "got rolled". 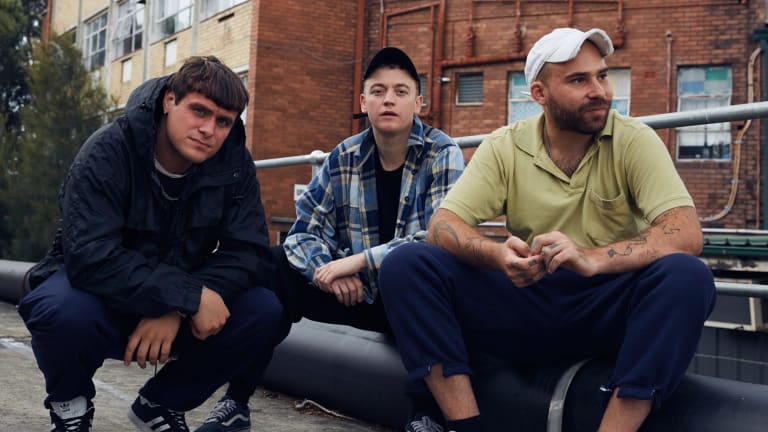 DMA’s are set to embark on a world tour, with Australian dates scheduled for June.

Today guitarist Matt Mason is considering these events from the comfort of the band's Sydney record label HQ, his trademark white cap perched atop his head, his arms peppered with a haphazard array of tattoos. "Our promoter was like, 'Don't go out, go straight [back to your hotel] after this gig'," he recalls. "But we didn't. We stuck around and tried to buy drugs on the street and got robbed.

"A lot happened on that tour," he adds, pointing to the time in Hamburg when Took rolled his ankle and lost his wallet, and the moment in Cologne when Mason's phone was stolen and he was beaten up "by a bunch of guys". "Europe's pretty f—in' dangerous these days, dude, it's pretty crazy. It's not all f—ing bicycles and cheese and shit."

Perhaps not surprisingly, when the band returned to Sydney, Took's mental state was "frazzled". So much so that it inspired a melancholy song on the group's new album, For Now, called The End.

"I'd never been that bad before," says Took of his headspace, lightly tinted sunglasses affixed to his face. "I think we were all pretty mentally fragile. We'd never really done extensive touring like that, being over a year at that point."

That The End is about this topic is news to Mason, who when quizzed about the song prior to Took joining the interview says, "I don't know anything about that, we rarely talk about our feelings".

Affable and polite – though possibly wishing he was elsewhere if his constant tapping on the table is anything to go by – there's something delightfully blunt about Mason. Take, for instance, his answer when asked if he was relieved upon completing the perilous task of following-up a successful debut album.

"Well, I don't think it was that successful," he shrugs. "Arctic Monkeys had pressure on their second record, but we're not at that level. Didn't really even think about it to be honest."

And then there's his brief – if not entirely inaccurate – summation of the band's sound. "It's just English soccer music, isn't it."

Despite that, he riles at constant comparisons between DMA's and '90's Britpop acts such as Oasis and Stone Roses.

"Hate it," he sneers, pointing to his love of groups such as Dinosaur Jr and Sonic Youth. "I get it, but it's not my influence at all, so it's frustrating to me at times."

One of the things he likes about the band's new album is that co-producer Kim Moyes (one half of Sydney dance duo the Presets) worked with singer Tommy O'Dell on minimising the Britpop leanings of his vocal delivery.

The Britpop comparisons are unlikely to dissipate with For Now, the swirling title-track to which sounds like a lost Stone Roses song. But given that the band have found success in Britain – even earning a nod of approval from former Oasis singer Liam Gallagher, for whom the band will open in front of 40,000 people in Finsbury Park in June – that may not be such a bad thing.

With recording sessions split between a room above Sydney pub the Lady Hampshire and the more plush environs of The Grove Studios on the NSW Central Coast, sonically For Now is a more polished effort than Hills End, even if it drinks from the same well artistically. While some of the songs were pieced together at soundchecks while touring, the band also drew on already existing material, with the song Tape Deck dating back almost 10 years.

As to why such tracks didn't make it onto their debut album?

"They just didn't fit with the vibe and flow of [Hills End]," Took says.

Any suggestion that drawing on old material may stunt the band's artistic progression is quickly shut down.

"I think if a song's a good song it doesn't matter when it was written," Took says. "It's always going to be a good song."

Took's goals with For Now were to make a record that was "a bit lusher, rounder, a little bit more thoughtful" than their debut, and he points to Moyes' experience with percussion and beats as adding an extra element. He also believes Moyes' work with O'Dell may see the vocalist heralded as "one of the best voices in the country".

The band will start their world tour in support of For Now in England, before heading back to Australia in June for a run of headline dates. It's a long way from 2012, when Took, O'Dell and Mason would gather on Friday and Saturday nights to drink beer and jam "with no intention of playing gigs". They made a handycam video clip for the song Play It Out that drew the attention of management and record labels, causing the trio to focus on having a goal.

"We said, we'd like to be very popular and play as bigger shows as we can," Mason says.

The guitarist is typically pragmatic about DMA's starting to achieve those goals.

For Now is out now