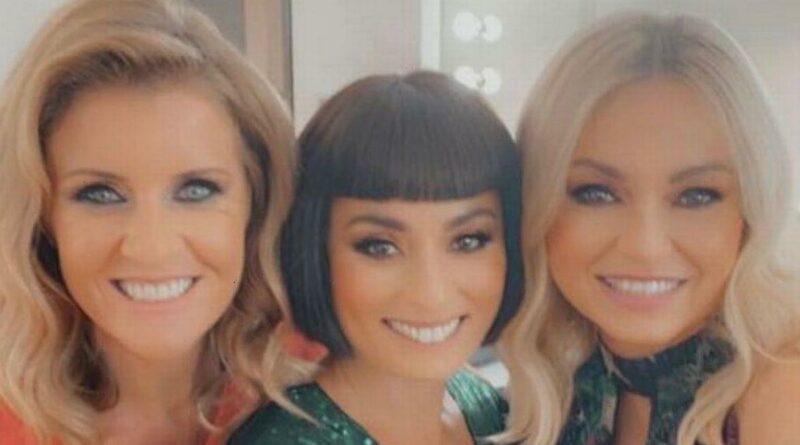 The 38-year-old took to Instagram to share a sweet reunion snap of the trio looking glammed up in a backstage dressing room.

Ola wore a pattered purple dress boasting cold shoulders and a keyhole cut-out, while her blonde locks were styled in neat waves.

Flavia beamed next to her in a green sparkly number that glittered under the lights, while she wore her hair in her classic short bob.

Erin stood out in a bright orange dress that complemented her golden tan, and wore her hair loose and cascading to her shoulders.

All three wore a full face of glam makeup and a wide smile.

Strictly fans were thrilled to see the three women reunite again and took to the comments to voice their glee.

"Miss you all on Strictly Come Dancing," one person wrote.

"Originals and the best," praised another follower.

A third fan chimed in: "Aw miss you all on strictly. Looking fabulous."

While someone else added: "My three favourite dancers."

Ola, who is married to fellow dancer James Jordan, appeared on Strictly from 2006 until 2015, dancing with the likes of Kenny Logan, Paul Daniels, Sid Owen, Steve Backshall and Iwan Thomas.

Flavia joined the show for series four in 2006 and stayed until 2012, when she won the series with gymnast Louis Smith.

Ola commented last week on the pairings of this series she was most looking forward to seeing dance.

"He's very tall and paired with Nadiya who's also tall. They'll look nice and smart in the ballroom dances.

"I'm also looking forward to seeing Tom Fletcher and seeing what he can do. AJ Odudu could be quite good as well. She's young and fit."