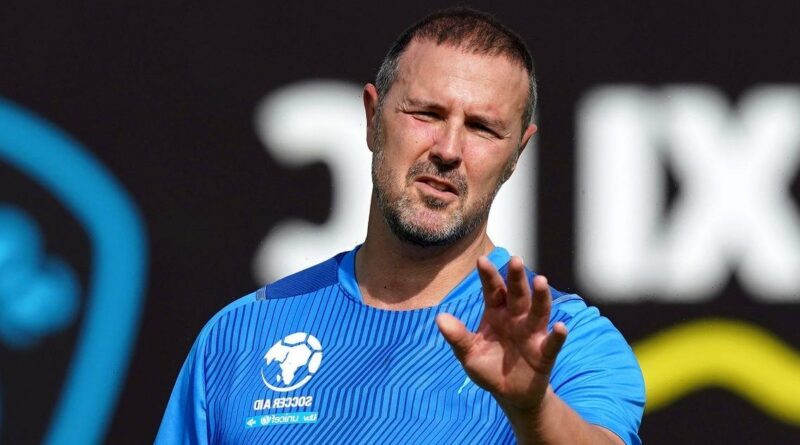 Television presenter Paddy McGuinness is no stranger to taking to the pitch for Soccer Aid but this year, he won't be hoping to score.

Paddy, 48, has shared on his social media that he is "gutted" to not be able to play this year after sustaining an injury.

The Top Gear presenter had been in training with his teammates at Mottram Hall, Cheshire ahead of this evening's game held at Manchester's Etihad Stadium in aid of UNICEF.

However, while he may not be taking to the pitch, Paddy is still set to cheer on his friends who are hoping to raise an eye-watering amount of money for the charity.

In view of his 539,400 Twitter followers, he penned: "Good luck to both teams today at @socceraid for @UNICEF_uk gutted I've had to withdraw with injury.

"If you've got a ticket you're in for an absolutely great day for a great cause. #socceraid."

The presenter had been set to take up position in goal, with comedian Joel Dommett now taking his place.

Paddy's fans instantly flocked to the replies section of his tweet, sending their best wishes to the former Take Me Out, presenter.

"So gutted for you. Feel better soon. I am sure the boys will do ya proud especially the #compstonator @martin_compston," said one.

While a second penned: "Good luck to both teams x hope your injury gets better soon."

"Gutted for you mate," said a third.

Before a fourth wrote: "Gutted you are not playing tonight. I was hoping to see an old school friend on the pitch."

Paddy's announcement comes as the second blow to Soccer Aid in less than 24 hours, with Roman Kemp being forced to withdraw from the match yesterday.

The former I'm A Celebrity… Get Me Out Of Here! star was forced to pull out after testing positive for coronavirus while at the swanky Cheshire hotel.

Sharing his devastating news, Roman, who was set to play on the World XI team penned: "I'm absolutely gutted. I've had a positive test come through so I won’t be playing at @SoccerAid tomorrow night. I'll be cheering from a sofa and hope that everyone donates as much as they can for the cause. Come on Soccer Aid World XI FC."

Due to his training regime, Roman thanked his Capital FM colleagues for taking the reins of his show earlier today: "Big thanks as well to @aimeevivian & @itswillmanning for stepping in on Capital Breakfast this morning. Gonna try and get back on air from Monday live from my bed."

Soccer Aid airs tonight on ITV with kick-off at 7.30pm.