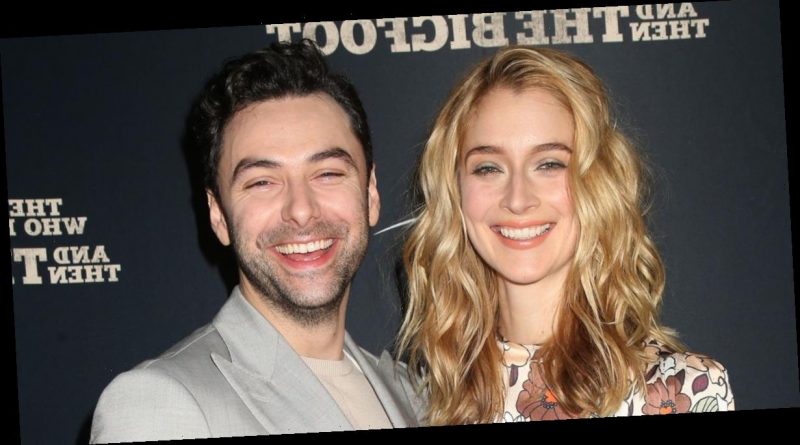 The Sun reported that the couple tied the knot in Italy after three years of dating and the actor has reportedly been spotted wearing a wedding ring.

An insider told The Sun: “The couple are both madly in love and couldn’t wait to get hitched when their schedules allowed.

“They’re both very private and have kept the ceremony very much under wraps, but he has been seen taking lockdown walks with his wedding ring on show.

“Aidan hasn’t been in a rush to get wed and has very much been waiting for ‘The One’ to come along — and anyone who sees them knows they’re the perfect match.”

Aidan and Caitlin, both 37, are believed to have gotten hitched as Aidan filmed his latest drama Leonardo in Italy,

He plays the famed artist and inventor Leonardo Da Vinci in the new Amazon show, in which he is seen locking lips with another man.

The couple met when they both starred in the 2018 US film, The Man Who Killed Hitler And Then The Bigfoot.

They have kept their relationship under wraps, preferring to keep their love lives private and away from the limelight.

The actor shot to fame in the BBC period drama Poldark, playing the titular character, Captain Ross Poldark in 2015.

He won many fans over with his shirtless scything in the drama as well as his passionate scenes opposite actresses Eleanor Tomlinson and Heida Reed.

Caitlin is best known for her role as Libby Masters, the wife of Michael Sheen’s character in the US TV drama, Masters of Sex from 2013 to 2016.

Aidan has previously been linked romantically to actresses Leonora Crichlow, 36, and Sarah Greene, 36 as well as artist Nettie Wakefield, 33.

Recently, co-star Eleanor Tomlinson said the sex scenes in Poldark with stud Aidan were "the most unromantic experiences".

She revealed the scenes are 'laughable' as all the actors are wearing tracksuit bottoms while under the sheets.