Guess what, Beanz? You don’t have to wait “No More,” because PRETTYMUCH is officially starting a new era, which means — new music!

ET can confirm the group, which consists of members Brandon Arreaga, Edwin Honoret, Zion Kuwonu, Nick Mara and Austin Porter, has inked a new recording contract with Sire Records. They will debut new music at the top of 2021, marking their first release in nearly two years.

PRETTYMUCH exclusively opened up to ET about their exciting next chapter, which includes heavy involvement in creating their music.  The band says they’re fully immersed in songwriting, producing, singing and even designing their own creative materials, like video concepts, album artwork and visuals during live shows. As Zion puts it, “It’s an elevated version of us. Whatever you saw before, it’s like that — on steroids!” 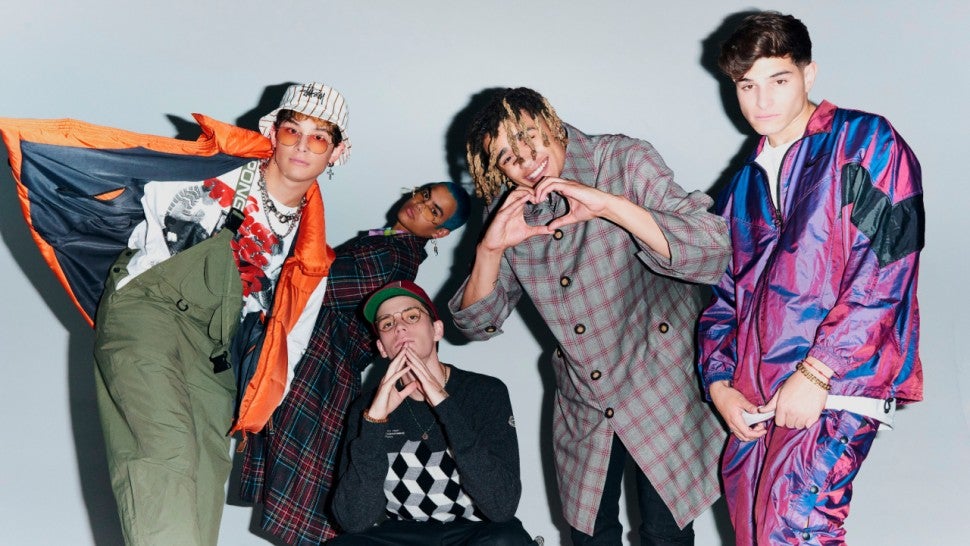 While Brandon calls PRETTYMUCH 2.0 “more advanced,” and promises their music will be “natural, authentic and real,” Austin wants fans to know they’re still delivering the style of music that made them famous. “We’re going to have the soulful ballads, we’re going to have the songs that you throw on at a party. The kind of songs that you just want to dance to and you can’t help but fidget in the car,” he explained. “It’s just going to be exactly what we envisioned when we first got together as a group… it’s going to be all [the concepts] that we originally came up with. Like, so unconditionally ourselves but just super next level.”

“I want us to be the anomaly. Like, the anti-boy band. We do all the things that aren’t supposed to work, but they work because it’s authentic, it’s undeniable,” Brandon gushed. “It’s like we’re doing our best and we’re having fun, that’s what matters.”

New songs will be produced by Brandon and Edwin, in addition to collaborators they named, like Kilo and Lido. As for songwriting, the band says the process has been extremely organic. Edwin says that instead of searching for the perfect hit, which they’ve tried in the past, they’re now “hyping each other up” and building off one another’s ideas. “I hear something Zion’s doing in the room and I go, ‘Yo bro, that’s dope, we should develop,’” the New York native explained. “Or, Brandon starts something and plays it out and we’re like, ‘Yo let’s go in!’”

PRETTYMUCH assures fans they’re still writing about topics that are super relatable — mainly, love. While Brandon and Austin admit they’re currently in love (swoon!), Edwin playfully shared he’s “always in love” and Nick added that he simply loves life. Of course, the band is also incorporating their signature creative metaphors and word-play into their lyrics, even revealing a few specific examples in the video above.

In addition to releasing new music, including plans to drop their first proper album, PRETTYMUCH also confirms that once it’s safe to do so, they plan to start touring again. Above all, they’re most excited to reconnect with their fans in a live setting.

Brandon expressed his gratitude for the Beanz, saying, “The barrier that there is now between us and our fans, I’m really, more now than ever, not that we weren’t grateful before, but being deprived of being able to see our fans has made it more. Now, it’s like, I’m looking forward to that.” Austin added, “We’re hungry for us to be in a situation where we can perform for them again.”

Until then, PRETTYMUCH is enjoying their time at home. Brandon, Edwin, Nick and Zion all live together, and told ET they’ve enjoyed reading, playing music and even taking online courses during their downtime. Austin lives with his longtime love, Ansley Mitchell, and their newborn son, Theodore, who was born in May.

“Everything just changed for me,” the new dad dished on fatherhood. “It’s cool being a dad. I think it’s super rewarding.  I feel like you learn a lot more about yourself when you have like a tiny you learning and developing. You start to be like, ‘Oh, I have this subconscious memory of me doing that when I was that little.’ He’s great, he couldn’t be healthier.  And you know, he’s a super easy baby.”

Austin also revealed who baby Theo’s favorite “uncle” is in the group, and if he plans to bring him on the road when the band heads out on tour. Watch the video above to find out!

CNCO and PRETTYMUCH's 'Me Necesita': Behind the Scenes of the Action-Packed Music Video! (Exclusive)

CNCO and PRETTYMUCH's 'Me Necesita' – Go Behind the Scenes of the Action-Packed Music Video!