When progressive-folk trio I'm With Her took the stage at a palatial candles-and-chandeliers type theatre in Princeton, New Jersey, the mood could not have been less formal than the surrounds. The group was midway through their tour of Europe and the US before heading to Australia next month, and the audience (30 per cent young women, 30 per cent kindly older couples with thermoses, and 30 per cent scarves) were calling out to each other from either side of the auditorium. "So glad you made it!" "See you at the next one!"

People travel to see Aoife O'Donovan, Sarah Jarosz and Sara Watkins. Each member already has their own following in what fans call "the scene": Irish-American O'Donovan is lead singer with The Crooked Still and has performed with The Punch Brothers, Stuart Duncan and Yo-Yo Ma. Texas native Jarosz is a banjo and guitar prodigy who signed to Sugar Hill before leaving high school, and at 27 has four albums and two Grammys. Californian guitarist and violinist Watkins is a founding member of Nickel Creek, and her self-titled album was produced by bassist John Paul Jones, the bassist from Led Zeppelin. 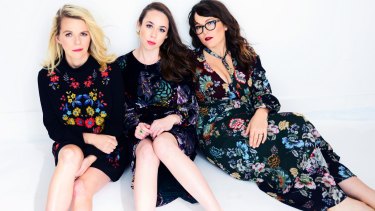 But when the lights come down I'm With Her is not three soloists, they are an ensemble with single-glance communication and chemistry that made The New York Times call them "a supergroup"; "three Americana virtuosos" whose "voices become one instrument, sharing every breath". Four years into working together, they still feel lucky.

"There's nothing that I love more than getting up on stage and playing our music," O'Donovan tells me backstage before the show. "Our first show was a few weeks ago, we hadn't played together in a while, and even the sound check – it just felt so good. There's a magic to it." 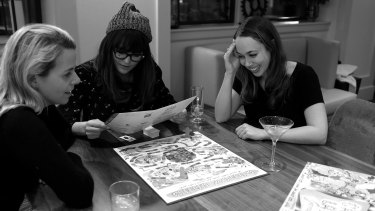 I’m With Her: The trio find moments of shared smiles both on and off-stage.Credit:Call My Name Photos

"It's like any relationship," adds Watkins. "There are a lot of relationships that could be good on paper, but it might not ever really have that …"

The group came together organically. "It wasn't like, management saying 'it would be great if you could do this'," explains Jarosz. "We had jammed together and it was just like … this feels really natural."

After years touring together and performing covers, including Nina Simone's Be My Husband and Adele's Send My Love (To Your New Lover), I'm With Her began writing their own material, and in February the band was named Artist of the Year at the International Folk Festival Awards. Their 2018 album, See You Around, was largely written in a 10-day stretch in December 2018, in a farmhouse in Vermont.

"Living together as we were writing, we lost track of whose ideas were whose," Watkins remembers. "We all just surrendered ownership in a way that let us fully collaborate. It was really beautiful. We all kind of gave up dominant ownership of an idea that we came up with, and consequently these songs feel incredibly shared."

"It takes a real admiration and appreciation of what each person in this band brings to the table musically and personally," O'Donovan adds. "There are plenty of musicians I trust to do something interesting, but I'm not a fan of everything that I think is good. Whereas with you guys, I'm just a genuine fan of everything you do."

The visuals of the album are a David Lynch summertime: big vintage sunglasses and poolside stripes. Paired with the traditional bluegrass instrumentation of banjo, fiddle, guitar, the result is the progressive in "progressive folk": on I-89 the trio's ethereal harmonies lean back on a gloriously grimy electric bass lick, while the title track and Game to Lose subvert traditional vocal arrangements, hanging onto a dissonance for longer than is comfortable and then fanning out into sunny rays and pleats of harmonies. Other pockets of the set list are more suited to cold pines and the folk-staple melancholy of the open road, or as fiddler Nancy Kerr once described "all Irish folk songs", "I love you, I love you, I love you, and now you're dead".

"Sometimes people will ask you to explain lyrics," Watkins says. "None of us like to do that. It simplifies it. I've already said it in a lyric. I didn't want to tell a story, that's why I'm not writing a blog."

With you guys, I'm just a genuine fan of everything you do.

"I do think it has to come from a genuine place," adds Jarosz. "I don't think that someone can come away from listening to something and have this deep realisation unless it does that for the writer. There's a lot of your own story in any idea, and I've felt very protective of ideas in the past, so it goes to show the level of trust we have for each other to hand something over and say 'I trust you'."

"That wasn't blind trust." Watkins agrees. "We earned that trust over two years of touring and working on each other's albums."

On stage the trio shines when that trust is most visible. Pausing the material from their new album, the three take turns playing from their solo records. Crowded inches away from each other in the centre of the stage, the joy and esteem is palpable as the trio find moments of shared smiles. Waitsfield, a group creation, is similarly delightful: the asymmetry of Watkins' double-stopped fiddle riff skitters over Jarosz's off-beat banjo in a foot-tapper that ends perfectly, predictably, precisely together. It's contagious: "we love you!" shouts a man from the audience as they tune. "We should tune more often," says Watkins.

"We try to always have a moment in our shows where we're around one microphone," Jarosz says backstage. "That's often the most joyful moment of the show."

"It feels important to bring people that," Watkins adds. "What people tried to create on albums a long time ago, how you could sequence things and create a world that people would experience all the way through, that's something that we as musicians can really only do in a performing setting now. The reality is most people are listening song by song or with an algorithm that somebody else is assigning them.

"I think there's something magic about seeing something where there was nothing before, a live show, an empty stage, and then seeing people create this sound that wasn't there before and will never be there again."

I'm With Her perform at the City Recital Hall, Sydney,, on April 16, at the Melbourne Recital Centre on April 18 and at Bluesfest in Byron Bay from April 19-22.