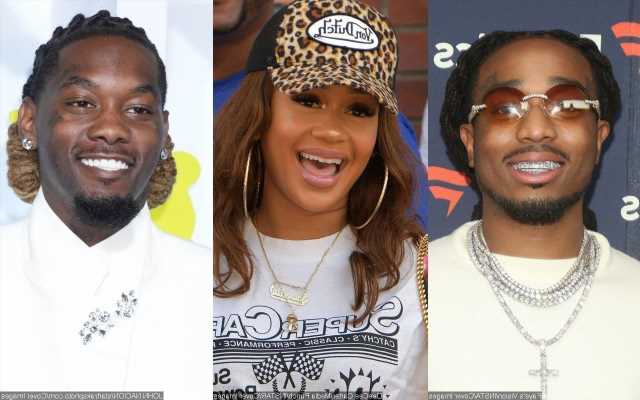 The ‘Workin Me’ rhymer appears to take a jab at his cheating ex, who had sex with someone close to him, on the new track from his upcoming joint album with Takeoff.

AceShowbiz –Quavo appears to further air dirty laundry of his past relationship with Saweetie. Following their ugly split, there has been speculation that the raptress may have cheated on him with someone close to him, a theory which now floats around again after Quavo and Takeoff previewed their new song “Messy”.

In a snippet of the track, lifted off their joint album “Only Built for Infinity Links”, Quavo disses an ex-girlfriend who hooked up with someone close to him. “I said ‘Caresha please’ ’cause she too messy/ B***h f**k my dawg behind my back, but I ain’t stressin’/ You wanted the gang, you shoulda just said it, we would have blessed it, Now s**t got messy,” he raps, seemingly also taking a jab at Yung Miami.

While Quavo doesn’t mention Saweetie on the song’s lyrics, the “Icy Girl” raptress recently appeared on Miami’s “Caresha Please” podcast, where she talked about the end of her long-term relationship with Quavo.

Admitting that she “was hurt” when their relationship came to an end last year, she confided, “I thought we was gon spend the rest of our lives together.” She added, “With him, I knew it was the one. It was different.” When pressed further what caused their split, she deliberately answered, “Just differences.”

When asked if Quavo cheated on her, the California star dodged it as responding, “I think the past is the past and I’ve moved on since then.” She further divulged, “I think we had a lot of growing pains together.”

While fans are convinced that Quavo is talking about Saweetie and Offset on “Messy”, Travis Porter recently weighed in on the alleged dispute between Cardi B’s husband and the other two Migos members. The “Make It Rain” rappers, which consists of stepbrothers Ali and Quez, and their friend Strap Da Fool, claimed in an interview with “We in Miami” podcast that the split was over a woman.