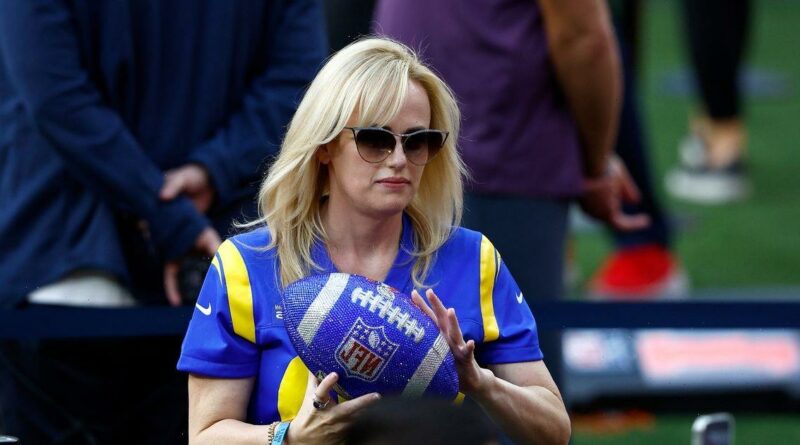 The 41-year-old actress has shed an incredible 35kg over the past two years and looked in great shape while attending the American Football championship game as an ambassador for the winning team, the Los Angeles Rams.

The How To Be Single star paired a Los Angeles Rams jersey with blue skinny jeans to show off her toned legs, with her blonde hair blown over her shoulder.

She finished the look with a pair of dark shades and flat white shoes.

Rebel was all smiles as she posed with players of the winning team and a number of celebrities.

"It's been a pleasure and a privilege being an LA Rams Ambassador this season! Congrats, you boys crushed it!!!"

In a series of posts, Rebel could be seen frolicking with her Pitch Perfect co-star Adam DeVine and his wife Chloe Bridges.

Dubbing 2020 her 'year of health', the actress lost a significant amount of weight after being advised to take up walking in favour of other higher intensity workouts in order to shift the pounds.

Last month, Rebel told Apple Fitness: "The doctor said to me, "Rebel, the best way for you to lose unwanted body fat is just simply walking.'

"'Doesn't have to be high-intensity, doesn't have to be uphill, just moderate walking an hour a day. And if you can do that, for you, for your body type, it's, like, the best way to lose unwanted body fat.'"

Having not appeared in a film role since her ill-fated appearance in Tom Hooper's widely panned Cats, she will next appear in a film called Senior Year.

The comedy stars Rebel as a cheerleader who wakes up after a 20-year coma and returns to her old high school.