Home » Music » Review: Catfish and the Bottlemen work up a sweat

A friendly security guard is passing out cups of water to the crowd by the stage, joking that it’s vodka. But Catfish fans don’t need a chemical-induced high – as soon as the Welsh four-piece hit the stage, they’re singing along with the band like a choir, word for word, note for note. 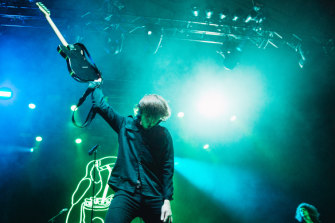 While their somewhat formulaic songwriting has seen zero progression over the two albums since 2014’s debut The Balcony, their art is well honed. And if they owe their success to anything, it’s to singer/guitarist Van McCann and his incredible onstage energy. Clearly with a name like that he was always destined for stardom, reflected in his onstage prowess. Darting confidently from one side of the stage to the other, leaning against other band members, dropping the mic stand and deftly catching it again, his spiritedness has him soaked in sweat second song in. Speaking on behalf of the audience, it’s pretty irresistible.

In-between-song banter is kept to a minimum, the four piece instead choosing to bash out one indie hit song after the other with the aim of keeping the electricity humming along – bam, bam, bam. The audience lap it up, girls sitting on the shoulders of their boyfriends, fists pumping in the air as the guitars crash and burn.

Everything comes to a head with Cocoon, the biggest track from The Balcony, where McCann is drowned out by a sea of voices (or perhaps it’s the lousy mix, a constant battle on the night) singing refrain “F— it they talk … ”. The Ride’s Seven and its impassioned plea for some time alone is also a highlight.

Not sure if they were running short on time, but there’s barely any space between set and encore, for which they’ve saved one of their best-loved tracks, Tyrant. The song’s rollicking rhythm is drawn out with wah-wah guitar before McCann nearly – and quite accidentally – falls over the drum kit. Frankly, at this stage it’s a miracle he can see at all through the waterfall of sweat running over his face. He throws his guitar over the mic stand, leaving the whole lot feeding back and giving  the band their marching orders from the stage (and hopefully into a large fluffy towel).