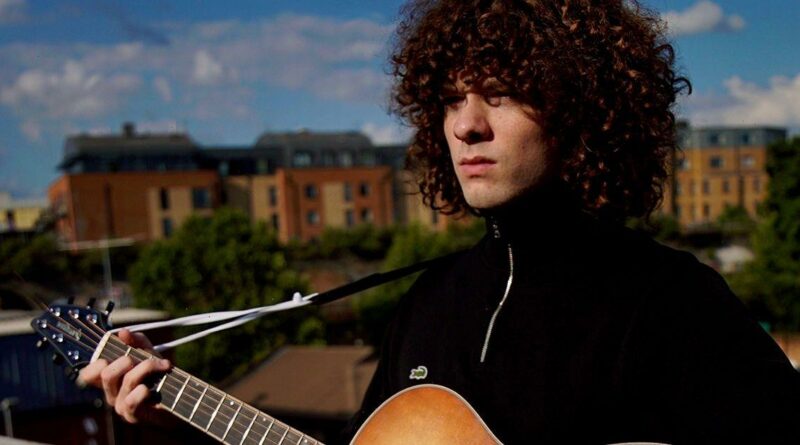 Glasgow emerging talent Dylan John Thomas is navigating a fast ascent to the top with his dizzyingly catchy yet deeply personal brand of indie pop.

The singer songwriter, who’s mentored by compatriot Gerry Cinnamon, is set to further his credentials as a bonafide breakout star with the release of his forthcoming self-titled EP in October.

The EP covers themes focusing on his tumultuous upbringing in foster care and working class experiences growing up in the Scottish city, where he honed his musicianship busking on Glasgow’s famous Buchanan Street.

“It was a graft”, he told Daily Star. “I see busking as an apprenticeship, singing the songs that you love.”

Dylan caused a buzz after touring arenas with Cinnamon in 2019 before selling out the legendary King Tuts quicker than any debuting Scott.

His stock then rose even further when he was hand-picked by Liam Gallagher to support him at Glasgow’s Hydro Arena.

“It was the most mental time ever”, he added. “It wasn’t until after it that I really reflected on it and went ‘what the f*** man!’. I don’t know what I’ve learned but it was one of the most mental things ever.”

Daily Star’s Rory McKeown caught up with Dylan to talk about his non-stop ascent so far, the creation of his self-titled EP, being mentored by Gerry Cinnamon, and supporting Liam Gallagher.

Hi Dylan. How can you sum up the past few months as an artist?

“I’d just come off an arena tour with Gerry (Cinnamon) and I had supported Liam Gallagher. Things were looking up. You’re put on the back foot for a bit.

“I was still in the house in my studio set up recording. Although the live shows weren’t happening, I still had that element of being able to write and learn songs. I was still progressing, and still am as an artist.

“That’s what lockdown has seemed to given me, that time to be able to reflect on what’s happened. I’d been touring for about five years and everything moved so fast. It’s the first time I’ve really been able to sit down as a writer and go ‘alright, so this is what’s been happening’.”

Speaking to a lot of artists, they say that touring is so full on but lockdown has allowed them the time to really focus on the writing side of things.

“Sometimes the hardest things are when you really find out about your character. One of the biggest things for me was that I started to learn a lot about myself. If you’re a writer, and in anything creatively, it’s usually an expression of yourself. That can be unhealthy when everything is going so fast.

“Sometimes people suffer when they’re touring too young. They’re not having time to write. They usually have second album syndrome and it’s nothing like the first album. The first album you’ve been writing for your whole life, the second album is written in six months.”

You’ve got the EP coming out last this year. Did you write it in lockdown or have you had these songs a while?

“I wrote all of it in lockdown. It’s interesting. I’ve always been obsessed with Mark Knopfler and Paul Simon with this finger-picking style of playing guitar. You can really access a lot more of the guitar than just using a plectrum.

“When I would write, it was based on that skill that I’d developed through finger picking. I was writing a lot before lockdown. The improvement that I’d had to be able to sit down and really learn songs, and figure out different ways of a pattern and approaching an experience through that style of guitar.

“The EP was finished. One day I was sitting and I came up with this melody. I thought ‘this has got something’.

“Wake Up Ma is about things that had happened growing up and growing up in foster care. I had never really been able to look back in a way where it didn’t sound, for me personally, like ‘poor me’. I wanted to let people know that if they were in the same position that they can find a way. They don’t need to be trapped, even if you’re up against it.

“I phoned up my manager and said I had to get the song onto the EP. I said I would record it in my house. I put on the strings, I recorded all the different instruments on it. It was one of those that it turned out it meant so much more that I had done it myself. Because of how deep the lyrics are, it had to be done in a way where it didn’t sound like there were 10 people on the record.

“I think for all the things we’ve suffered with, not being able to play live, there’s going to be a lot of good tunes coming out of the end of it. There are people in the same boat of me who have never really calmed down. They’ve not had time for self analysis or some reflection of the past, just things they’ve never really been able to grasp or things that they’ve never been able to square up in their mind, they’ve just had time to do that.”

The first single released was Jenna. Tell me more about that song. How long have you had that in the bag? What made you choose it for the first one?

“Just before lockdown, when we were rehearsing and touring, I had this riff. I went to rehearse and It was just me and my drummer one day. He had this wee ska beat. I was playing on the off beats. That was about two years ago and I never really followed it up.

“At the end of last year, we got into the studio and by this point I’d now had a keyboard player. The way they work nowadays is crazy. You can have strings on it, you can have bells, marimbas, xylophones. We were playing around and they came back with that riff. Every day we’d go into rehearsals and play that song. It must have been a week of throwing different ideas about to get it down.

“We recorded it in February. We hadn’t seen each other for four months by this point. We were learning songs through Zoom. It was a bizarre experience. We went to record Jenna and I think it made sense for that to be the leading single on the EP. It keeps a sonic thread throughout.

“It’s been a good start to get that out.”

What can we expect from the rest of the EP?

“A lot of my influences are based on Johnny Cash, The Beatles…the next song, Feel the Fire, there are a lot of Beatles chords in there, in the sense of playing with different key changes and you’ve got a Johnny Cash bass line.

“It’s similar to the previous two singles, Problems and Nobody Else, in the sense it’s still got those alternating bass lines, shuffle drums, fast choruses. That’s the gist of it.

“When I Get Home is a wee country bop.”

You’ve been putting out covers on YouTube, including your version of Someday by The Strokes and Johnny Cash. What was the idea behind uploading those?

“They’re my favourite songs but I’ve been so obsessed with making my guitar sound like two guitars. It all stems down from when I was younger nobody I knew played guitar. If you did play guitar, it was almost like you were laughed at. The environment was kind of hostile, like ‘look at the state of this f****** person’. Nobody I knew played guitar unless you were a goth.

“The songs I were getting in to I wanted to have somebody playing along with me. I decided if I was going to play I would need to be playing rhythm and lead myself at the same time.

“These are the songs I’ve been obsessed with my whole life. I’ve never really heard them done in a style that I would like to hear them in. I make them up in my own way. I love the guitar playing where it sounds like two players are playing at once.

“I busked for about four years. Your repertoire needs to grow to be able to busk. Otherwise people will walk past and go ‘he’s singing the same three songs’. Busking is when you need to learn so many songs. That only adds to your skill with your covers.”

Was that in Buchanan Street?

“I felt more nervous seeing who was on the spot than playing on the spot! You wouldn’t play until 11 o’clock and then you’d play for a few hours. I see busking as an apprenticeship, singing the songs that you love.”

You sold out King Tuts super quickly. How special was that moment?

“You go from busking through to open mics and gigging. You always see people talk about selling out Tutts. It’s the culmination of that chapter. Tutts is one of those things that seem to be the rite of passage for people that progress through. Every single Scottish musician I know that’s passed through Tutts have gone through to something else.

“You go through busking for years and dreaming of doing those kind of gigs. For that to come to fruition it’s hard to find words to describe it. So much has built up towards that. The fact it was the fastest selling is just nuts. I grew up 10 minutes away from it down the road. It’s a milestone.”

What did you learn from supporting Liam Gallagher? What was the experience like?

“I was so caught up in the fact I was supporting somebody whose biggest albums were out before I was born. The fact it had happened it seemed to be in a blur. I was supporting Gerry as well. With Gerry, those were special dates. The full experience was one big high. I was just playing Fifa on tour buses and turning up at arenas.

“The gigs were always sold out but you weren’t the headline. You were turning up to play tunes. It was the most mental time ever. It wasn’t until after it that I really reflected on it and went ‘what the f*** man!’. I don’t know what I’ve learned but it was one of the most mental things ever. What can you say to that? You go from busking to having an opportunity to do a sold out arena tour.”

What’s next for you Dylan? Do you have an ultimate goal?

“I see it in micro steps. The goal would be to create longevity towards being able to tour and release albums for years to come. In terms of the short term, I don’t really think about things too much.

“I’m just enjoying writing tunes every day. I’m very lucky, I’m living the dream. There are people listening to my tunes. It’s amazing thing to know people are listening to my songs and coming to gigs. It’s an amazing thing that’s happening and I’m just enjoying it, having a laugh, writing and recording, and now we’re going to be able to go out and play shows for the first time in two years.”