"I haven't really listened to a whole lot of music lately," admits Sam Beam, the songwriter behind the project Iron & Wine. "Silence has become such a valuable commodity. Modern life is so noisy. Instead of putting on a record, I like to enjoy the quiet."

You can understand a yearning for silence given that Beam, 43, is the father of five daughters. His music plays best in a quiet space, his murmured vocals set, to fingerpicked guitar and gentle acoustic adornments. His earliest albums – 2002's The Creek Drank the Cradle and 2004's Our Endless Numbered Days – were hushed collections of barely-there ballads, the lo-fidelity recordings giving the songs a kind of tactile warmth. 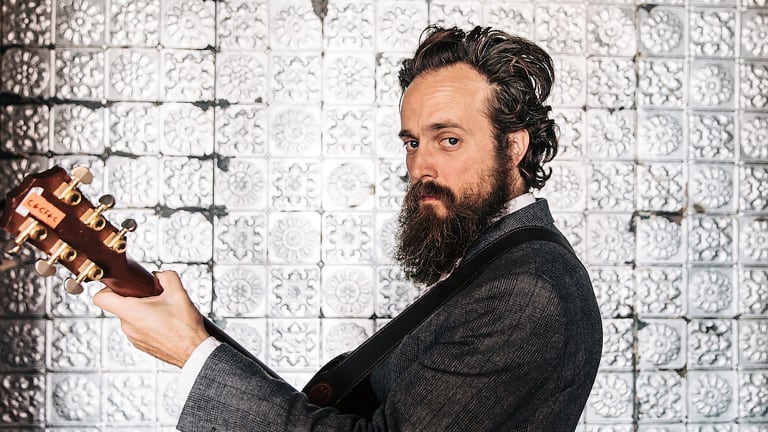 Right from the start, Iron & Wine songs were embraced by music supervisors, turning up in countless TV shows and films. Flightless Bird, American Mouth – from his third album, 2007's The Shepherd's Dog was used as a recurring romantic soundtrack in the Twilight franchise. Having been a film-student, cinematographer, and cinema lecturer before he was a songwriter, Beam is happy to license his music.

"I remember what it was like trying to get permission to use music, and how much of a pain in the butt that can be," he says. "So, I'm really generous. I haven't turned down too many narrative film projects or documentaries. Commercials you really have to pick and choose, but when someone's trying to tell a story, I love adding to that story in some tangential way."

After his early records were steeped in folk, blues, and country, subsequent albums have drawn influence from jazz, R&B and soul. All of his musical influences are American, placing Beam in an ongoing tradition. "We use American sounds: slide guitar, blues elements, jazz elements," he says. "America is the setting in which I write songs and my songs take place. As a writer, you need to understand where your story takes place. Ours take place in, usually, the South-East of America, and reflect that culture."

His sound grew bigger, in both sound and scope, on 2011's Kiss Each Other Clean and 2013's Ghost On Ghost. Then Beam made a couple of collaborative albums with Band Of Horses' Ben Bridwell (2015's Sing Into My Mouth) and folkie songwriter Jesca Hoop (2016's Love Letter For Fire). Returning to Iron & Wine, his sixth album Beast Epic stripped things back.

"I was writing these more introspective songs and it seemed appropriate to do a quieter, more acoustic-sounding record," Beam says. "[Ghost On Ghost] was so large … it had the horn sections, string sections, vocal arrangements. It was pretty big, pretty dense. So, it was easy to step away from that, as a breath of fresh air."

Beast Epic was also released on Iron & Wine's original label, Sub Pop, which doubled down on connections to the project's early days. "That didn't occur to me while I was writing it," Beam says.

"But, as I was getting ready to put it out … I made a comment … that you follow this path, and you think you're going in a straight line, but really you're walking in a circle, and the path has led you back to where you began."

Iron & Wine will play the Melbourne Recital Centre on Wednesday, May 23, and the Sydney Opera House on Friday, May 25 and Saturday, May 26.