Scarlett Moffatt has had to contend with a number of rumours about herself since she rose to fame on Gogglebox.

But she’s admitted that she has no idea how one particular story started – that she was apparently dating her Saturday Night Takeaway co-star Ant McPartlin.

Scarlett, who is in a relationship with boyfriend Lee Wilkinson, told The Sun that she tried not to let the false reports bother her. 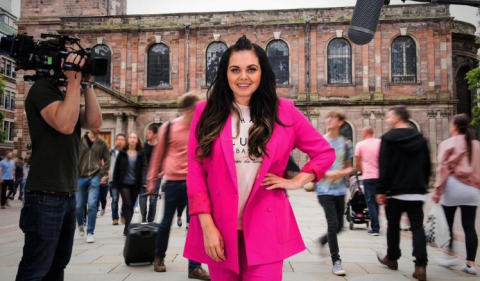 “Well it wasn’t true so, honestly, I always think, ‘Those who mind don’t matter and those who matter don’t mind’,” she said.

“My family and friends knew, so no, it didn’t really enter my head.”

Scarlett, who was also crowned Queen of the Jungle on I’m a Celebrity… Get Me Out of Here! in 2016, says she thinks the rumours grew on Twitter, but she has no idea why people believed them.

“I do love a conspiracy theory myself, but I’m more of an alien, mermaid sort of conspiracy girl,” she said.

The rumours were fuelled (for some reason) by a photo Scarlett posted online of her bedroom, which featured a framed photo of herself with Ant & Dec.

But she said that she doesn’t think there’s anything wrong with having the photo up, saying it reminds her of one of the best days of her life.

“It’s a picture of me as Mary Poppins. It even beats me in the jungle, like the highlight of my working life,” she said.

“To do the Saturday Night Takeaway finale in Disney World, honestly, was my dream. So every morning when I wake up and see that photo, I’m like, ‘I’m living my dream’.”

She admitted that she and her other Takeaway co-stars “just all missed” Ant on the final two episodes of this year’s series, following his drink-driving conviction.

“Ant was always in the back of our minds because we all love him, as the viewers do,” she said. “He’s just such an amazing soul, an amazing person.”