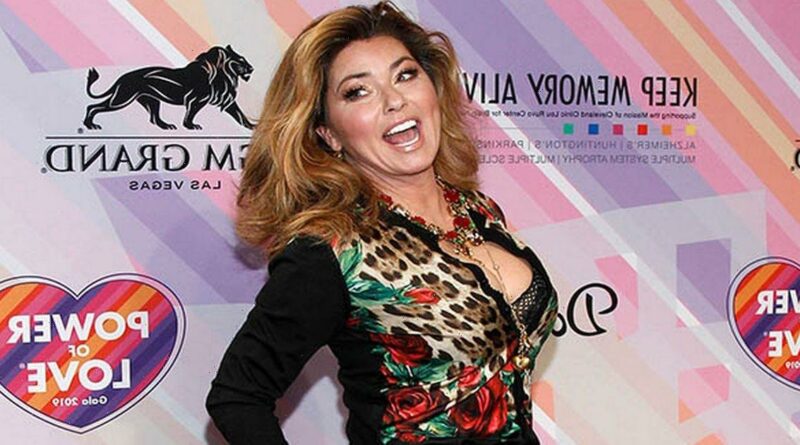 Shania Twain, 56, still remains every inch the sexy songstress as she did when she first stepped onto the music scene – and her fans still adore her.

The singer was well and truly thrown into stardom when she became a front focus of the '90s with her many iconic pop tracks, including Man! I Feel Like A Woman and That Don't Impress Me Much.

Even in 2021, she remains a popular songstress as her 1.5million Instagram followers continue to fawn over her – especially as she teases on her profile that she's "in new music mode".

Just yesterday the beauty took to the 'gram to share a stunning throwback snap of herself from her latest album NOW, released four years ago.

The album cover saw Shania flashing a hint of cleavage as she posed in a completely sheer black bra, but covered herself with her arms placed strategically.

She donned leopard print gloves while her hands framed her face as the beauty flaunted a windswept look as her hair floated by her shoulders.

With a stunning makeup look, Shania donned a full face with bold lashes before finishing it off with a subtle earring.

As she shared the snap, she wrote: "Four years ago today I released my album NOW. The album that reunited me with you all, I'm so grateful to it and to you."

The beauty hit a whopping 58,000 likes at the time of publication as her fans quickly flooded her profile with compliments.

One user wrote: "My favourite."

Another added: "I love it so much! Can't wait for the next."

A third person wrote: "So beautiful."

Elsewhere, Shania was flooded with questions about when her next album would be released as fans urged her to release new tracks immediately.

The singer has released a handful of albums since the '90s and early noughties, with Still The One: Live from Vegas having its debut in 2015.

While Shania was at her peak in the '90s, she still has endless loyal fans who are eagerly waiting on new music being released – and she's certainly hinted that it's on its way.

In the meantime, she hasn't made a solid release date for new tracks, but fans are ever hopeful.