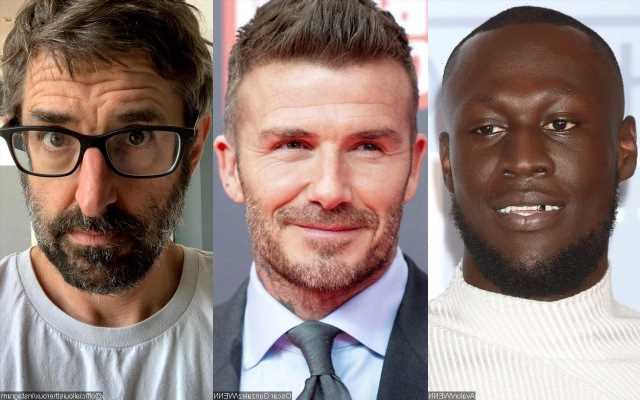 AceShowbiz –Stormzy‘s next music video is reportedly set to feature the likes of David Beckham, Gordon Ramsay and Louis Theroux.

The 28-year-old rapper started filming his comeback promo in London this week, and he’s lining up a number of big-name cameos.

An insider told The Sun newspaper’s Bizarre column, “Stormzy is pulling out all the stops with his new project and he has called everyone he knows to get involved.”

“He has approached Emilia Clarke, Lewis Hamilton, Louis Theroux and Jonathan Ross, as well as David Beckham And Gordon Ramsay.”

“The shoot start­ed yesterday and will be happening all week so fans should keep their eyes peeled.”

“One location is the National Portrait Gallery. It’ll be a real spectacle.”

“It’s a great look for them to be associated with him so a lot of stars have leapt at the opportunity.”

“It is just a case of whether their schedules align to make it work.”

Last month, the “Big for your Boots” hitmaker confirmed his third album will be released later this year.

The megastar kicked off his “Heavy is the Head” U.K. tour in support of his second studio album at Cardiff’s Motorpoint Arena in South Wales, where it was announced that gig-goers would be the first to be able pre-order the follow-up to his acclaimed 2019 LP.

The “Vossi Bop” hitmaker said in a video aired during his set, “This is the album of my dreams.”

“This album is deeper than man could ever imagine.”

A press release stated that the Londoner offered the pre-order at his concerts as a “personal gesture of gratitude to his loyal and supportive fans who have waited almost two years for the U.K. shows.”

Fans were offered a lanyard with a QR code to access the pre-order link.

The run, originally planned for 2019, had been postponed due to the COVID-19 pandemic.

The 51-year-old documentary maker filmed an in-depth chat with the music star on tour and at Stormzy’s home for one episode.

He said, “To be kicking off with the genius that is Stormzy is proper pinch-me stuff. I can’t wait to get going.”