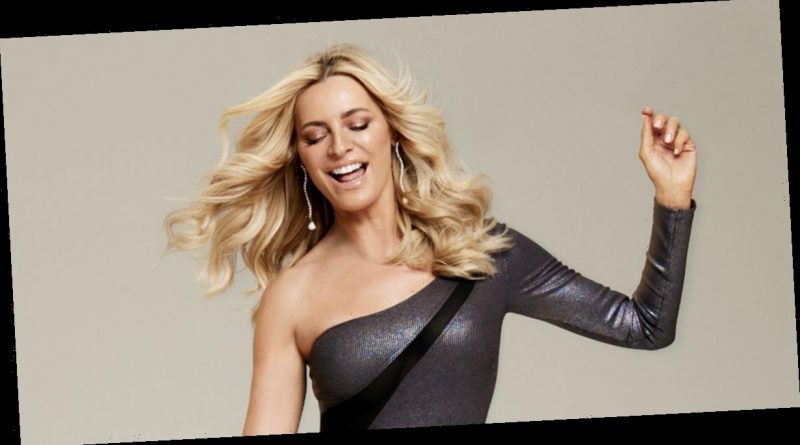 The 51-year-old, who presents the dance show alongside Claudia Winkleman, looks utterly phenomenal in the photos, as she donned a number of skimpy outfits.

In the snaps, Tess looks as confident as ever and during her chat with the publication she revealed: "I don't feel any different to when I was in my thirties!"

Tess can be seen in one snap for the magazine standing on top of retro radios as she carries one while dancing with her arm raised up.

Donning a tight black off-the-shoulder swimsuit, Tess was glowing all over as she danced away.

Wearing the tallest sky-high heels, the star managed to keep her balance while standing on top of the radios.

For the shot, she wore her long and glamorous blonde hair down in big bouncy waves.

The star appeared to be singing in the snap with her eyes slightly closed.

In another picture, the star underwent an outfit change as she slipped into a different black swimsuit.

This one featured a halter-neck design with a gold buckle detailing at the bust.

Again on top of the stereos but this time she posed while leaning on them as she sat down.

Tess posed by leaning herself up and her bodyweight with one arm.

She also dons an 80s-inspired midnight blue leotard with a gold belt for some of the shoots and a red tracksuit.

Opening up on how she feels at 51, Tess told the publication: "Confidence comes from cutting yourself some slack.

"I'm in my fifties now. That's still a shock when I say it out loud, because I don't feel any different to when I was in my thirties."

During her chat with the magazine she also opened up on how husband Vernon Kay's recent stint on I'm A Celebrity… Get Me Out Of Here! made her realise how much she wants him around the house.

The couple have been married for 18 years and share daughters Phoebe, 16, and Amber, 11, who were rooting for their dad during his stint in the I'm A Celeb castle last year.

Tess said: "The printer, the dishwasher, the dryer all broke – basically everything you need when solo parenting. I was like: 'OK, Vern, I really do need you around the house.'

"We're soulmates, me and Vernon. It's been a ride. And I love him more than ever."

Read the full interview with Tess in the April issue of Women's Health UK, on sale tomorrow.