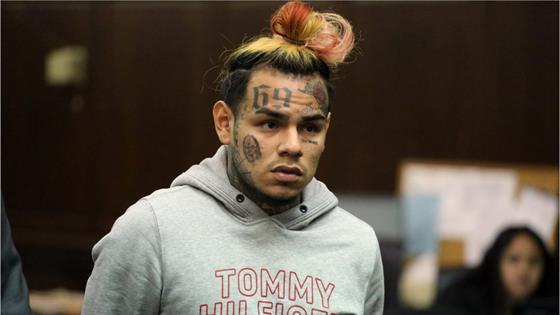 Tekashi 6ix9ine has pleaded guilty to nine counts in his federal drugs and weapons criminal case and is cooperating with federal prosecutors.

The rapper admitted at a court hearing last week to being a member of the Nine Trey Gangsta Bloods, a group the U.S. Attorney’s Office has called a “criminal organization” in court documents obtained by E! News, and said he had helped other gang members rob people at gunpoint, the newspaper reported. He told the judge that in one case, he “paid a person to shoot at a rival” gang member to scare him, and to “maintain or increase my own standing in Nine Trey,” and also added that the gang engaged in “shooting at people, robbing people and, at times, drug trafficking,” the outlet said.

As part of his plea, 6ix9ine will cooperate with federal officials “against multiple violent people associated with the same criminal enterprise of which he admits, or will soon apparently admit, being a member” of the group the Nine Trey Gangsta Bloods, NBC New York cited court records as saying. It is unclear how his cooperation will affect his prison term.

The U.S. Attorney’s Office had declared in court documents obtained by E! News that the rapper and others were members and associates of the Nine Trey Gangsta Bloods, aka the “Enterprise,” a “criminal organization whose members and associates engaged in, among other activities, acts involving murder, robbery, and narcotics trafficking” in the New York metropolitan area. They said 6ix9ine “participated in the operation and management of the Enterprise and participated in unlawful and other activity in furtherance of the conduct of the Enterprise’s affairs.”

The U.S. Attorney’s Office also said in court records obtained by E! News that members and associates of Nine Trey “engaged in violent disputes” with their rivals and “committed multiple shootings, robberies and assaults” against them. The office also claimed that they sold drugs like heroin, fentanyl, MDMA and marijuana. 6ix9ine pleaded guilty to conspiring to distribute and possessing with intent to distribute at least one kilogram (2.2 pounds) of “mixtures and substances containing a detectable amounts of heroin.”

6ix9ine had previously pleaded not guilty in the case and in November 2018, his attorney said in a statement that the rapper was “completely innocent of all charges,” NBC New York reported.