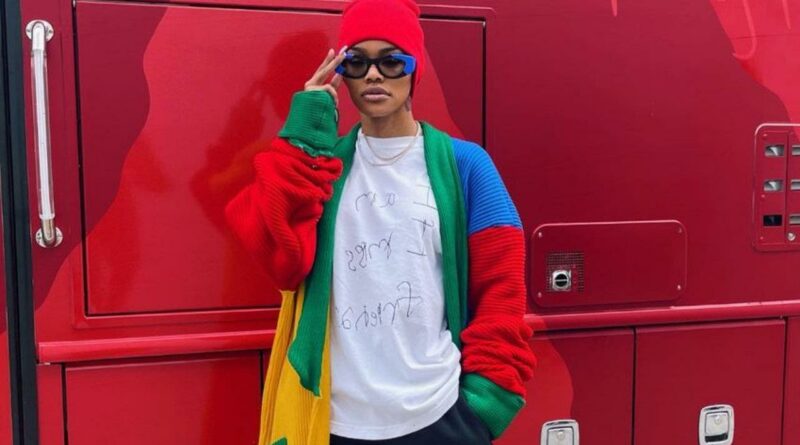 During her performance at ‘Last Rose Petal’ concert in Los Angeles, the ‘Gonna Love Me’ singer puts her show on hold to check in on a fan, who appeared to be in distress.

AceShowbiz –Teyana Taylor has taken concert safety into her own hands in the wake of the deadly crowd surge during Travis Scott (II)‘s Astroworld Festival. While performing at her “Last Rose Petal” farewell tour in Los Angeles, California at The Novo, the “Maybe” songstress stopped mid-song to check on a fan’s well being.

In the viral video from the second night of her tour on Monday, November 8, the 30-year-old musician could be seen walking to the side of the stage and instructing the security to bring the female fan to the front after the singer repeatedly asked if the concertgoer was alright. “Bring her up here. She okay? We ain’t doing that. Come on,” the artist said, before seemingly referencing the Astroworld incident. “I’m about to retire. You ain’t gonna sue me, baby. [I] want to make sure you’re good, baby.”

Another video from a different angle showed the fan being lifted to the front. The “Gonna Love Me” singer then double-checked to make sure the partygoer was safe. “Make sure she got some air. She good? Her eyes open? You good? Say, ‘Rose Petal.’ Okay, baby. You good,” she said, before going back singing her song.

Following the tragic events at the Astroworld concert that killed eight people and left hundreds injured, Travis, Drake and the event organizers were hit with lawsuits filed on behalf of people who attended the festival. A day after his performance, Travis, who insisted that he’s unaware of the situation, offered condolences and said he’s trying to help families of the victims.

“I just want to send out prayers to the ones that was lost last night,” Travis said in a video he shared on his social media account. The “Sicko Mode” rapper added, “We’re actually working right now to identify the families so we can help them through this tough time.”

More recently, Travis reportedly offered to cover the funeral costs of the fans who lost their lives. Sources close to the 30-year-old rapper claimed that he had reached out to the families of the victims. “These are the first of many steps Travis plans on taking as a part of his personal vow to assist those affected throughout their grieving and recovery process,” the source said.