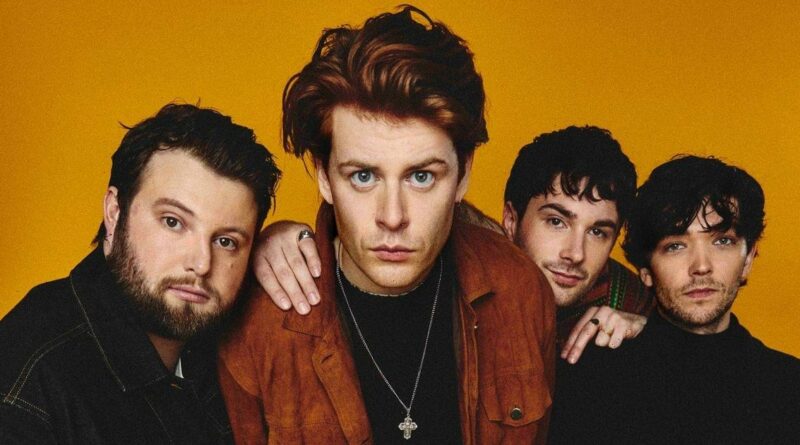 The Amazons are more amped up than ever with their anthemic third album, How Will I Know If Heaven Will Find Me?.

Singer Matt Thomson put it best: "It feels like we’ve been a boat that has been banging around the Atlantic or some big stretch of ocean without a working compass, and now we’ve kind of worked out where north is, and we’re like, let’s go."

The Reading rockers rode onto the scene in 2017 with their self-titled debut and followed up with Future Dust in 2019; both broke the Top 10.

But something special stirred during the last two years of lockdown, because the boys are back with the wind in their sails and "the light at the end of the tunnel".

Matt explained: "We wanted to do a record that fought against the mundanity of our lives at that point [lockdown], and I was saying this to the boys, ‘Let’s make a record to soundtrack that festival, that light at the end of the tunnel.'"

Singer Matt caught up with Daily Star's Sam Huntley after meeting at an Amazons show in London.

What does this album mean to you?

“Everything man. It’s been the last couple of years of our lives. Kind of a combination of the last two records as well. I truly don’t think we could have made this record without experiencing and learning from the last two records that we made. And just how you make records. That kind of craft, but also just learning about ourselves and what we actually like to do.

“I feel like the last and first record was stylistically a bit different. Like an evolution, and I think we’ve just evolved even more so. I think lyrically this is the first time I’ve truly had a story to tell, basically. So lyrically this is the most cohesive of the records we’ve made. So for that reason, probably the most proud [I’ve felt] of anything we’ve done."

This might be cliché, but is this a new chapter for the band?

“I think with The Amazons we warm into stuff. We get our sh** together a few tries in on so many different things, from the micro stuff that happens every day to the more broad stuff like records. I couldn’t agree more with you, not to be a cliché but it does feel like a new chapter for the band. I’ve said to the boys that it feels like we’ve been a boat that has been banging around the Atlantic or some big stretch of ocean without a working compass, and now we’ve kind of worked out where north is, and we’re like, let’s go. And we actually have a destination to go on.”

“For that reason I feel like it’s a new chapter because I think the balls that we’ve started rolling on this record, we can carry on with. I’ve also told the boys this is the first of a trilogy of records. This is like an internal band conversation that is inevitably coming out of my mouth right now.

“I almost feel like, creatively with the album thing that if we don’t almost give ourselves a stop point, then you’re kind of just a bit lost. Do you know what I mean? It’s like writing a book without knowing how it ends.”

“I felt like this was a fitting start to a trilogy, and if we can create an arc that climaxes on the firth Amazons record, that gives us parameters and focus, and I think that’s more interesting for the fans as well, and our audience.”

“Because then albums are special rather than like, in ten years time when we’re putting out our ninth record and we’re just like ‘we’re just gonna keep on doing this because we’ve got mortgages to pay.’

Do you have an idea of what the second and third record are gonna be like?

“[Laughs] The music that we’ve been writing at the moment could equally have been written and recorded in a basement in New York or it could be played on an open road somewhere. It’s kinda scrappy. It’s rough. It’s kind of… we’ve been listening to a bunch of New Wave. The Replacements and The Clash to like Talking Heads and stuff. It’s a little bit weirder and a lot more aggressive, but ultimately super soulful.”

Was it a conscious effort to write a more upbeat record?

“It was 100%, because it was a series of epitomes I think. I was on a trip in Joshua Tree with my girlfriend and we were just playing loads of music, and it’s a long drive. And we spent a few days there in the National Park. It got to the point where it was an elephant in the room with what we were going to play, and that elephant was Joshua Tree by U2. Amazing record. We were at this point where we’re like ‘So cliche. Whatever. Let’s play everything but that,’ and it got to the point where it was like, ‘There is nothing left to play right now to suit this place.’

“We put it on and I kind of blacked out ‘cos we were singing and we were just in the moment and I just remember looking over to my girlfriend and we’re just f***ing in it and screaming, and I was like ‘Cool. Okay, wow. Interesting. Who gives a sh**. Let’s just try and write something that connects with people in the same way that this has connected with me, evidently'. So that was an epiphany.

"And also, the f***ing pandemic and being indoors for two years. We didn’t want to do a quiet folk record. We wanted to do a record that fought against the mundanity of our lives at that point, and I was saying this to the boys, ‘Let’s make a record to soundtrack that festival, that light at the end of the tunnel. We don’t know when this festival is. It’s a hypothetical festival, but it kind of represents all of this being over and being able to touch people again and sing with people in the same room.”

“We wanted it to be loud, and big and full of life.”

What’s it like working with Maggie Rogers, and could you tell the story of how you met?

“We met at Glastonbury when The Amazons were covering one of her songs at like a BBC session kind of thing, and the act after us was Maggie, so I thought ‘Best to say hello. We just covered your song. It’s called On + Off. Such a good song.’

“And we just kept on meeting at like Fuji Rock Festival, this was back in 2017 so we just kind of hung out when we can. Had some really fun experiences with Maggie actually. When she’s come to London, we saw Lauren Hill, Eagles. It’s a great like music friendship that would never have happened unless music put us in these positions.

“A lot of the friendship is just based on ‘What are you into at the moment?’, ‘Who are you listening to?’, ‘Oh you should listen to this record’, or ‘Have you read this book?’.

“You know friendships where you kind of come out of the hang with a Notes app filled with things to listen to and read and watch. And it’s just that exchange and ideas and stuff.

“It was really cool to hear a few of her new singles, because it really sonically tied into a lot of stuff that we were talking about two years ago. U2’s Achtung Baby, that record. A bunch of stuff like that.”

“Long story short, I was at her house and we were just hanging out and I had this first idea on an acoustic guitar, and was like ‘Do you mind if I play it to you?’ and she was like ‘Go ahead,’ and I played to her and I was like, ‘I get to the chorus and I just don’t know what to do.’ And she just instantly started singing this emotive, fun melody and it just opened up this whole new room of ideas and possibilities for the sun, and it was super inspiring to see someone work like that. She’s incredibly talented. If it seems that way, it’s because it is! It’s [Say It Again] one of my favourite songs on the record. Because of that, but also lyrically it is very indicative of my time in LA with my girlfriend.”

Do you have any artists/bands that you’d like to work with in the future? Big old question!

“It’s a great question! It’s a great opportunity to like manifest something. I think there’s a lot of producers. I see Jack Antonoff working with a lot of people at the moment. Everything that he comes out with is super cool.”

“I started something with Mike from Royal Blood that is yet to be finished but it sounds really cool. It’s kind of glam, it’s got this really awesome chorus that’s kind of weird. He wrote it and he got me to come round to his studio in Brighton and played it to me, and we’ve been jamming it a little bit since. So one day.”

“In terms of pop singers, I really like Sigrid. We saw her in Berlin. We were supporting a band in Berlin and finished our set, and ran to a taxi, fifteen-minute drive to where Sigrid was playing and just walked in for the final few songs of the set, and just the energy and joy int hat crowd was like wild. It was amazing. She’s such a great performer. Her band are amazing and I just love that she’s into Neil Young and she loves Coldplay and I love Coldplay. I’d just love to write a song with Sigrid. I think it’d be f***ing good man.”

You sold merch for The Amazons before working with them! What was that like?

“It was a real last minute thing. We were a band in Reading and doing the local scene, so the promoters knew about us and we had a good relationship with them. One of them put on Royal Blood at a tiny bar called The Face bar and they were like ‘Royal Blood are in town, they’re playing a show tonight. Can you come down? 25 quid in it for you.’ I was like ‘Yes, Jesus, obviously.’

"Back in the day mate that was at least 10 pints! We were rubbish, we were not good merch sellers – we got a bit of cash. Didn’t meet the band or anything like that, we were just there trying to do our jobs selling t-shirts to people and then just watching this two-piece just tear the bar apart. Like what the heck, it’s like this insane stadium show inside this tiny Reading bar. That was amazing."

'How Will I Know If Heaven Will Find Me?' is out now.