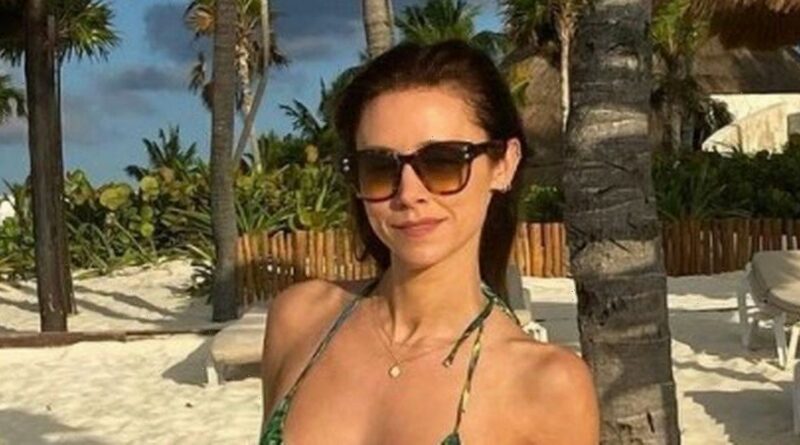 Una Healy has shared a sizzling snap of herself in a green bikini with fans praising her "stunning" figure.

The Saturdays band member, 40, has been vacationing in Cancun, Mexico.

Posting to Instagram on Wednesday, Una shared a gorgeous photograph of herself wearing a green bikini top and black bikini bottoms.

The Irish beauty flaunted her toned abs while posing on a sandy beach in the sensational pic.

Palm trees and deck chairs could be seen behind Una as she completed her look with a pair of dark brown sunglasses and a pendant necklace.

She captioned the post: "Good morning from sunny Mexico."

Una appeared fresh-faced in the image, with her hair slicked back in a style which suggested it had recently been wet.

She held her manicured fingernails by her side while smiling into the lens.

Quick to praise the "stunning" pic were admirers from within Una's 652,000 followers.

Replying to her post, one follower wrote: "Absolutely stunning."

A third follower said: "The figure on you, Una."

The mother-of-two looked fabulous as she changed into a bright orange two-piece which highlighted her deep tan, captioning her follow-up post: "Holiday spam in full swing."

In the images and short Boomerang clip, Una could be seen frolicking in her hotel pool as she giggled playfully.

Her Mexico break follows her ex-husband Ben Foden recently confessing that he "owed her an apology" after marrying his new partner shortly after their split.

The 36-year-old former rugby star got hitched to Jackie Belanoff Smith a year after he and Una's separation in 2018.

On his regrets about the timing, Ben recently told OK! Magazine: "Obviously, what I did was very selfish in regards to Una.

"I think it was a shock to her, me getting married so quickly.

"Una and I hadn't been together for a year and a half but I think what made it bad was it was such a big thing in the media and it was everywhere, so, I did owe her an apology for that and should probably have let her know a bit more about what was going on."