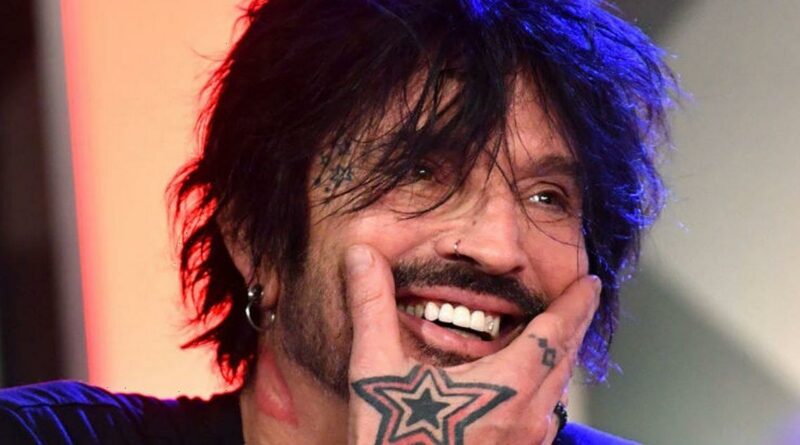 Musician Tommy Lee is having the last laugh as he shared yet another snap to his Instagram page, making a rather obvious dig at Instagram bosses.

The star left his fans in hysterics with his most recent snap just days after opening up about his nude picture which was shared across social media.

Tommy, 59, left his followers collecting their jaws from the floor when he happily uploaded a full-frontal nude snap with his manhood on full display for all to see.

Now, the Mötley Crüe drummer has stripped completely nude once more sharing the snap on his Instagram.

However, his meat and two veg were cleverly covered as he spread out on an inflatable while relaxing in a lavish swimming pool.

Instead, they were protected by the tail of what appeared to be a dragon inflatable while Tommy spread his legs out as he kicked back.

Captioning his snap, he penned: "Yo @instagram!! This cool!?"

The upload which has since racked up over 127,000 likes was soon flooded with comments from fans with one saying: "I think this one will stay up (pun intended)."

A third went on to pen: "@tommylee they better not take this one down!"

"You gonna put someone's eye out!" exclaimed a fourth.

Tommy recently opened up about his X-rated snap while performing at San Antonio, Texas, saying he got "f**king sideways as f**k."

He told the audience: "A couple of weeks ago, we had like a two-week break off the tour and I went on a motherf**king bender, bro.

"A bender! I got f**king sideways as f**k and got naked and posted pictures of my d**k."

Despite being a "t*tty man" he urged his audience to show off their own intimate areas, exclaiming: "Usually, I mean I'm a t*tty man, so I like to see t*tties. "But tonight, tonight it's equal opportunity night! Tonight I want to see everyone's d**k! Come on boys, pull your s**t out!"

Tommy's initial snap saw him legs akimbo wearing nothing but a chain around his neck and his famous nipple piercings.

The image shocked his wife Brittany Furlan, who commented: "Oh My God!"

While Ryan Sickler joked: "Does the camera add 5lbs?"