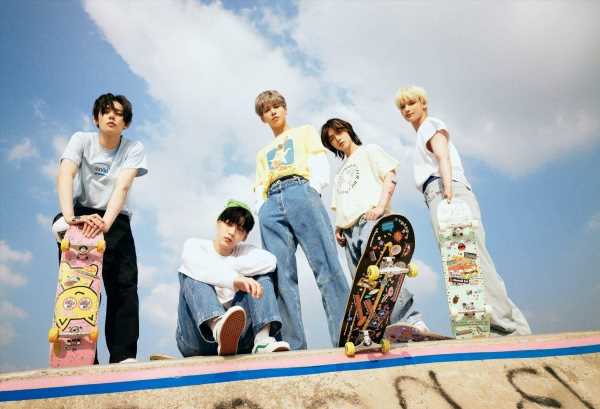 The Chaos Chapter: FREEZE kicked off the quintet’s The Chaos Chapter era on May 31. With the new album series, TXT began experimenting with rock and punk sounds and became more involved with songwriting and music production.

“MOA Diary (Dubaddu Wari Wari)” is TXT’s first song to ever be dedicated to their fan base, MOA. All five members worked together on the track.

During the media showcase, Soobin shared that while some listeners may think the song is cheesy, it displays TXT’s sincerity that MOA loves. Huening Kai also revealed that he used entries from his own diary as inspiration for the song’s lyrics.

“LO$ER=LO♡ER” is the repackage album’s lead single. During the media showcase, Yeonjun revealed that Bang Si-hyuk encouraged him to write the rap for the song. This marked Yeonjun’s first time working on an album’s title track.

Beomgyu shared that Scooter Braun of Ithaca Holdings and HYBE America gifted a guitar once used by Keith Richards of the Rolling Stones to Bang. The guitar was then used to record “LO$ER=LO♡ER.”

Midway through the media showcase, members of the press were able to watch the “LO$ER=LO♡ER” music video, and then the band performed the song. “LO$ER=LO♡ER” is an emo pop-punk track, and it is even catchier than TXT’s previous lead single, “0X1=LOVESONG (I Know I Love You) feat. Seori.”

In the song’s music video, each member faces a different challenge that teenagers encounter, ranging from losing passion for a hobby to not having a supportive boss or parents. As they cope with being “losers,” Soobin, Yeonjun, Beomgyu, Taehyun, and Huening Kai have a desire to be a “lover” and hero.

TXT grew once again with ‘The Chaos Chapter: FIGHT OR ESCAPE’

Even though The Chaos Chapter: FREEZE was released mere months ago in May, the members of TXT appeared even more mature, confident, and reflective about their careers while promoting their newest comeback. “LO$ER=LO♡ER” channeled the angst and intensity of “0X1=LOVESONG (I Know I Love You) feat. Seori” into something even better.

The Chaos Chapter: FREEZE debuted at No. 5 on the Billboard 200, a personal best for TXT. When asked about their rise from K-pop rookies to global idols at the media showcase, Taehyun answered that if they keep their sincerity, they will be able to experience even more success.

Even though TXT only debuted in 2019, the members have quickly become leaders that Generation Z can look up to. With their songwriting, charisma, and musical talent, The Chaos Chapter: FIGHT OR ESCAPE asserts TXT as storytellers for all generations.