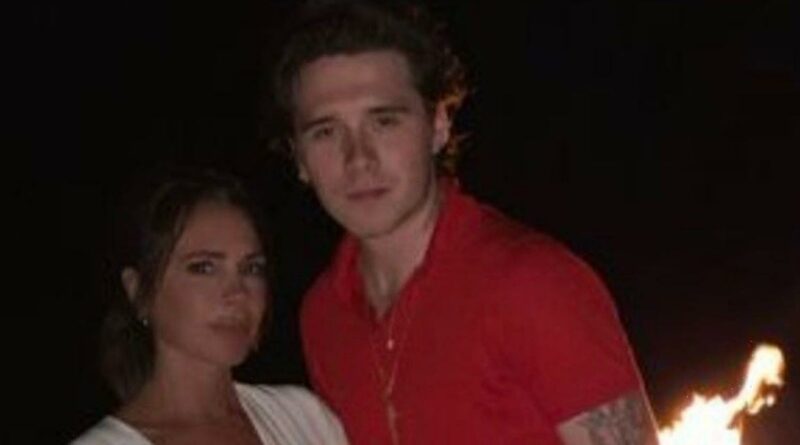 Victoria Beckham has paid tribute to her son Brooklyn Beckham and his wife-to-be Nicola Peltz ahead of their wedding on Saturday.

The Spice Girls star shared a series of touching photos on her Instagram page as she excitedly looked forward to the nuptials.

Victoria, 47, posted the snaps showing husband David Beckham and children Romeo, Cruz, and Harper all indulging in a family meal in Miami.

She captioned the post: "An exciting weekend ahead of us!! Kisses from Miami. We love you @brooklynbeckham and @nicolaannepeltz!! Kisses @davidbeckham @romeobeckham @cruzbeckham #HarperSeven [love heart emojis]."

One of the snaps showed David, 46, with his arm around 19-year-old Romeo's shoulders while they smiled for the camera with a display of balloons behind them.

Another featured Harper, 10, hugging her father tightly as he tentatively held her arm, and a third saw Cruz, 17, playing around as he wore a gold grill on his teeth.

Brooklyn, 23, will exchange vows with billionaire heiress Nicola in front of an array of celebrity friends at the lavish ceremony on Saturday (April 9).

Rumours have even been rife that Prince Harry and Meghan Markle could be set to fly into Florida for the thought to be wedding of the year.

David and Victoria and The Sussexes have been firm friends for many years, with the family attending their wedding at St George's Chapel at Windsor Castle in May 2018.

One friend who isn't thought to be attending is Geri Horner – she has allegedly flown out to Melbourne with former race driver husband Chris Horner for the Australian Grand Prix on Sunday.

A source told The Sun: "Geri has been accompanying Christian where possible on all of his work trips.

“This one is particularly far away but it is the Easter holidays so it was possible to make the journey."

Of the remaining Spice Girls, Mel B confirmed her attendance earlier this week, while Emma Bunton and Mel C are thought to be attending but have not publicly confirmed it.

And with preparations fully underway for the big day, Brooklyn's star-studded ceremony is the talk of the town.