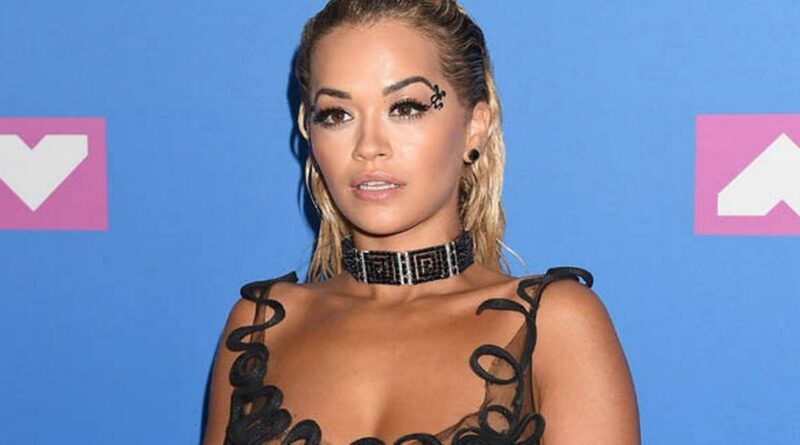 Throughout the years, music artists have received the coveted astronaut themed award for the best music videos, including best dance video and lifetime achievement awards.

In recent years, the event has also seen stunning performances from artists including Lady Gaga, Ariana Grande, Miley Cyrus and The Weeknd, to name a few.

The red carpet has also seen a variety of runway looks, including some of the sexiest outfits including bodysuits and barely there dresses.

We look at some of the sexiest looks from the MTV Video Music Awards in the past two decades.

The embellished jumpsuit crossed diagonally over the rapper's torso, and matched the purple seashell details on her body.

Teamed with purple platform boots and hair, Lil Kim wowed on the red carpet as she arrived to present an award at the event with Diana Ross and Mary J. Blige.

Christina Aguilera arrived on the red carpet at the MTV Video Music Awards in 2002 wearing a top made from a scarf, teamed with a tiny denim mini skirt, high heeled black boots and white baker boy hat.

The singer had just released one of her best-selling albums Stripped, which featured iconic looks in videos for songs including Dirty.

Aguilera presented the award for Best Male video at the event in New York.

Singer and actress Jennifer Lopez arrived on the red carpet in a floor length gown at the MTV Video Music Awards in 2014.

The Jenny from the Block and On the Floor singer wore a silver Charbel Zoe dress at the event, teamed with a matching silver clutch bag and shoes.

She dazzled on the red carpet as she arrived at the event in Inglewood, California.

Singer Ciara took to the red carpet at the MTV Music Awards 2013 in a barely there dress by designer Givenchy.

The 'naked' dress was a floor length embellished gown, with the embellishment detail adding a flawless finish to Ciara's outfit.

Ciara looked stunning as she arrived on the red carpet, before performing at the awards ceremony in New York.

The singer wore a number of outfits on the night, while she hosted the ceremony at the Microsoft Theatre in Los Angeles, where artists including Taylor Swift and 5 seconds of summer won awards.

On the night, Rita won the award for best dance video for the song Lonely together, which was a collaboration with the late DJ Aviici.

Nicki Minaj teamed up a see through skirt and bodysuit on the MTV Video Music Awards red carpet in 2018.

Minaj wore a nude thong bodysuit with the see through skirt from brand Off White, teaming the outfit with a choker and high heeled nude shoes.

On the night, Nicki Minaj performed a medley of her hits and also won the award for best rap video.

Supermodel Heidi Klum was another star to wear a 'naked dress' at the MTV Video Music Awards in 2017.

The supermodel arrived on the red carpet to present an award at the event held in Inglewood, California.

Singer Normani arrived on the red carpet in a stunning floor length dress at the MTV Video Music Awards in 2019.
Her gown, made by Nicholas Jebren, was covered in crystals and featuring a thigh high split in the skirt.

The singer won the award for best hip hop video on the night, and gave a performance of her hit single 'Motivation', with some reports calling it 'the performance of the year'.