Home » Music » 'We're Putting a Piece of Ourselves Out There': The Linda Lindas Talk 'Growing Up' on Debut LP 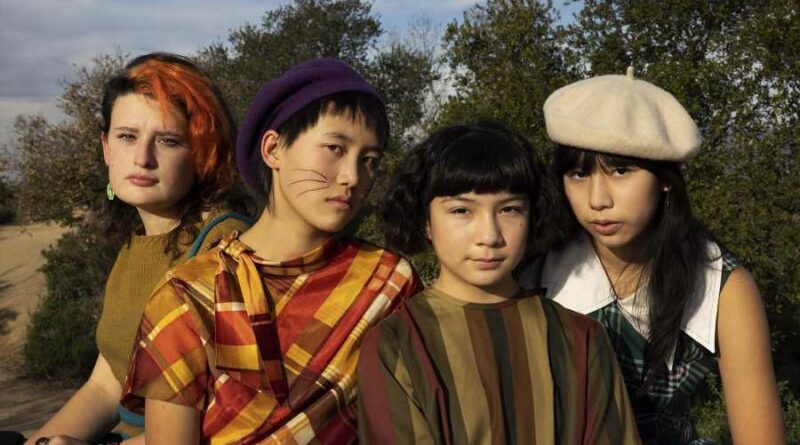 The members of the Linda Lindas casually refer to it as “The ‘Racist, Sexist Boy’ Thing” — the performance at the Los Angeles Public Library in May 2021 when the band unleashed a blazing punk anthem inspired by a prejudiced schoolmate that turned into a whirlwind of newfound fame.

A video of the four young, talented Asian and Latinx girls stomping through the tune and belting its fed-up lyrics (“You are a racist, sexist boy/And you have racist, sexist joys/We rebuild what you destroy …”) went super-viral and catapulted them from L.A. cult favorites to internet superstars. A bunch of television performances, a slew of interviews, and a signing with underground bastion Epitaph later, the Linda Lindas — sisters Mila de la Garza (vocals, drums) and Lucia de la Garza (vocals, guitar), 11 and 15, respectively; their 13-year-old cousin Eloise Wong (vocals, bass); and their family friend Bela Salazar, 17 (vocals, guitar) — will finally release their debut album, Growing Up, on April 8. The title track is out today, along with a video directed by Opening Ceremony’s Humberto Leon.

“With the ‘Racist, Sexist Boy’ thing, it was cool to see that our song can actually make a difference,” says Eloise, “that so many people can see it, and be affected by it and that we can have an impact even though we’re just four people.”

The band huddled around a monitor for a recent video interview at Mila and Lucia’s house, where they filmed the “Growing Up” video, to talk to Rolling Stone about songwriting, friendship, the pandemic, and working with cats in wigs. They often complete each other’s sentences and nod as they listen to one another talking. And the four practically jump through the computer screen with teen excitement when asked about joining this fall’s mega When We Were Young fest in Las Vegas and opening for the Beths, Jawbreaker, and Best Coast this spring and summer.

Mila, Lucia, Bela, and Eloise have known each other and been around music for most of their young lives. Lucia and Mila’s dad is Grammy-winning producer Carlos de la Garza. They began performing together in 2018 at L.A. festival Girlschool, as part of a pickup band for Kristin Kontrol of Dum Dum Girls and played DIY shows in Chinatown for years. In 2019 they opened for Bikini Kill at the Hollywood Palladium.

Their attention-grabbing covers of Bikini Kill’s “Rebel Girl” and the Muffs’ “Big Mouth” were featured in the Amy Poehler–directed Netflix film Moxie, and they wrote and recorded a single featured in a documentary about Baby-Sitters Club character and Asian-American icon Claudia Kishi. And they self-released a four-song EP in December 2020.

But the past year has introduced them to a new level of fame that they say they didn’t really expect.

“When we started the band, it wasn’t the intention to be famous,” says Lucia. “We liked playing music and performing music and just doing covers of songs we really loved. It was fun.”

As with the EP, the album was written during the first lockdown phase of the pandemic in 2020, when the girls had to attend school remotely and couldn’t see one another or other friends regularly. They say they found it cathartic to write down their feelings of loneliness and confusion.

“It was really hard to be in the pandemic,” says Bela. “For me, it was super overwhelming, but having music really helped us a lot. Even though we had to have masks and be outside when we practiced, we were still doing something. And it kind of, at least for me, helped my mind to think about something else. It’s easier to say what you’re feeling in a song. And say it to your friends.”

Some of the themes from the EP return on Growing Up but with more mature vocals and sophisticated songwriting.

“I think you can really tell our voices are different, maybe because we’re all older. And I think our playing is better from practicing and writing so much,” says Bela. “It’s really cool to hear our progress.”

The first song on Growing Up, “Oh!”, is a kind of Cars–meets–Go-Go’s rocker about feeling unheard (“Oh! When I say something I wish I had shut up/Oh! And when I try to help I always screw it up”). Another track, “Nino,” is a tribute to one of Bela’s cats (“Gentleman by day/Hunter by night”). The album also features a studio version of “Racist, Sexist Boy.”

The new single, “Growing Up”, written by Lucia, celebrates the intense friendships (“People that make you want to stay young forever,” she says) and simple pleasures of youth, but also nods to the very normal desire to speed through the scary and awkward parts of adolescence. It’s catchy and danceable, and you can imagine teenagers screaming it from car windows on the last day of classes.

“When I first heard the song, I cried,” says Bela, currently a senior in high school.

The “Growing Up” video reflects the pulsing energy of the song. The girls participate in a frenetic game of dress up in outfits by Rodarte and Batsheva. Meanwhile, their cat co-stars wear matching versions of the band members’ clothes, complete with little wigs and colorful berets.

“Whenever the cats were being filmed, you couldn’t go in the house, and if we did go in the house you had to, like, tiptoe around,” says Lucia, as all four girls exaggeratedly mime out those cautious movements.

“You know, cats, they like to do their own thing,” adds Eloise.

Directing cats is definitely more challenging than directing an adolescent punk band, says Humberto Leon, who shot the entire video on an iPhone 13Pro, in part because it helped him to make the video look as if it was shot from the cats’ point of view. He says he wanted the clip to be full of elements where he “felt like it was bringing the girls’ joy and happiness out.”

The voices of Leon’s own eight-year-old twin daughters turn up at the end of the clip, along with adorable old photos and footage of when the Linda Lindas were much younger. “I wanted to remind everyone that these are really amazing girls that really did grow up together, and hopefully, this is something fun for them to look back on,” Leon says.

As they prepare to unveil Growing Up, Mila, Lucia, Eloise, and Bela say they’re still adjusting to people knowing their names and their music. “People come up to me at school and are like, ‘Hey, Mila! I love your band!’ ” Mila says. “I feel awkward, but I do appreciate it.”

But the band members say they feel lucky to have a platform. And, as they sing in “Growing Up,” they’re grateful to have one another to help them navigate this new phase of their lives.

“We get closer to each other when we write songs about what we’re feeling,” says Lucia. “We’re putting a little piece of ourselves out there to show who we are. That’s kind of scary, but it’s a lot less scary when you’ve got three other people to do it with you.”