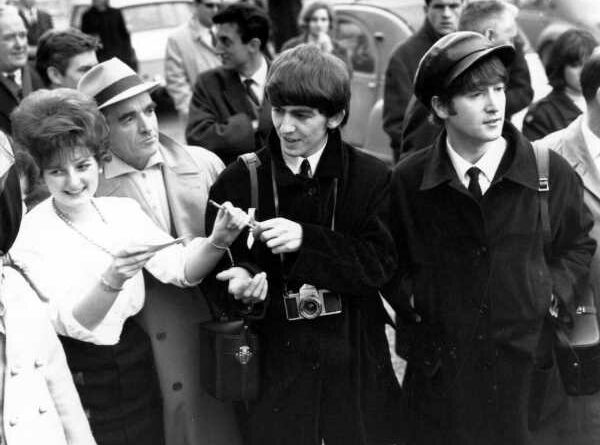 George Harrison had some fascinating views of the world. After only being a Beatle for a short time, George knew he wasn’t cut out for it. Sure, he made some great memories, but he didn’t truly enjoy any aspect of being in The Beatles or fame. George didn’t like people wanting a piece of him or expecting things from him. Sometimes even making new music was a hassle because he had to deal with the materialistic music industry and its rules.

So it’s truly no surprise that George despised Beatlefests. He thought they sold fans, who either couldn’t let go of The Beatles or the fact that they split, false stories just to make a buck.

In a rare interview with Rolling Stone in 1979, promoting his new album George Harrison, George talked about what he thought of the “subindustry” that formed around The Beatles following their split. “There seems to be an extraordinary number of people who were either your manager, your road manager, delivered the milk…,” Rolling Stone said to George.

After The Beatles broke up, fans couldn’t believe it. They needed to have something that made them feel close to the band after they were gone. So Beatlefests were places where they could all come together to celebrate the band. But they were also places where virtually anyone the band dealt with could continue to profit from them. An ex-road manager could get paid to talk about his experiences, whether they were true or not, at a Beatlefest, and fans would eat it up.

“Yeah, and the fifth Beatle . . . there’re about 10 million fifth Beatles,” George replied. “No, really, that’s sickening. All those Beatlefests and things are a terrible rip-off. These people – ‘the man who gave away the Beatles’ – none of them know what they’re talking about.

“It’s like Britain has always been hung up talking about the Second World War – even now you turn on the TV and they love to talk about the war. It’s like that. The Beatles were in and out of these people’s lives in a flash, and yet they’re still there fifteen years later talking about the ten minutes we were in their lives, and robbing the money of innocent kids while doing it. It’s pathetic. It’s immoral; it shouldn’t be allowed.”

George couldn’t understand why fans couldn’t let go of The Beatles. What else did they want? Beatlefests prospered and continue to today, which is a testament to the fact that fans don’t want to let The Beatles die out. Of course, it’s great that fans are loyal. However, George thought Beatlefests were places where fans continued to try to get something out of the band.

George just didn’t understand what people wanted and why they craved more. “Well, they’ve got ’em,” George said. “They’ve got the films – Help!, A Hard Day’s Night, Let It Rot, Tragical History Tour. They’ve got lots and lots of songs they can play forever. But what do they want? Blood? They want us all to die like Elvis Presley? Elvis got stuck in a rut where the only thing he could do was to keep on doing the same old thing, and in the end his health suffered and that was it.

“The Beatles fortunately did that hit-and-run. But every year we were Beatling was like twenty years; so although it might only have been five or six years it seemed like eternity. That was enough for me, I don’t have any desire to do all that. It might have been fun for everybody else, but we never saw the Beatles…

“We were just four relatively sane people in the middle of madness. People used us as an excuse to trip out, and we were the victims of that. That’s why they want the Beatles to go on, so they can all get silly again. But they don’t have consideration for our well-being when they say, ‘Let’s have the Fab Four again.’”

George never wanted to be a Beatle again

In more than a few interviews, George said he’d never want to be a Beatle again. Being asked this question time and time again proved George’s point. People couldn’t let go, and they wanted to know if there was any chance of the band reforming. For the reasons previously stated and many more, George hated his time as a Beatle. He was often scared for his life and his soul. The press ate away at him too.

Asked if he’d want to go through it all again, George said, “Never. Not in this life or any other life. I mean, a lot of the time it was fantastic, but when it really got into the mania it was a question of either stop or end up dead. We almost got killed in a number of situations – planes catching on fire, people trying to shoot the plane down and riots everywhere we went. It was aging me.

“But we had a great time. I think fondly of it all, especially as we’ve been through all the aftermath of Apple. Everybody’s sued each other to their hearts’ content, and now we’re all good friends.” Trust George with looking at it positively somehow. But George wouldn’t be happy that Beatlefests continue to take place today.