After a measured introduction from the Brandenburg Orchestra, harpist Xavier de Maistre launched into the solo exposition of the Harp Concerto in C, Opus 82, by French composer Francois-Adrien Boieldieu with elegant clarity, tapering and phrasing each idea with panache and drawing subtle variety from the harp's delicate tonal range. 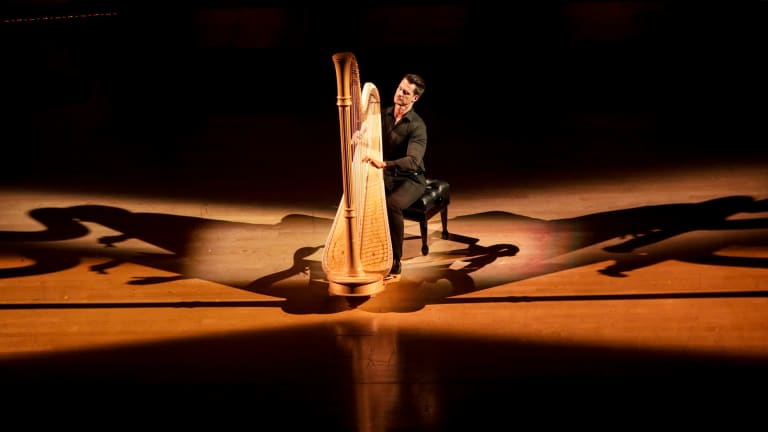 Boieldieu is sometimes called the "French Mozart" but the Brandenburg Orchestra's performance of the Symphony No. 20 in D major, K. 133 by the 16-year-old Austrian Mozart (not admittedly the best of his teenaged works) put that idea to rest.

Whereas Mozart was a genius at eliding one flight of musical imagination into the next, creating a shifting, irregular sense phrase structure, Boieldieu seemed to like cadences that tied up every idea in a bow, pausing for effect before moving on to the next.

But de Maistre drew out its quintessential grace with stylish imaginative flair.

During the concerto, director Paul Dyer kept the orchestra in check, allowing the harp's delicacy to carry into the hall and, in the finale, a rondo that unusually took this major key work into a minor key close, partnered with de Maistre in creating textures of varied intricacy.

The second half began with a rhythmically taut performance of Carl Philipp Emanuel Bach's Symphony No. 1 in D Major.

There followed a performance of the orchestral version of Ravel's Pavane for a Dead Princess that Dyer curiously claimed had "never been performed in Australia on period instruments"!

When the Conservatorium Orchestra performed it under Henri Verbrugghen in 1918, eight years after the orchestral version was written, the instruments were a little closer to Ravel's period than the seventeenth and eighteenth century replicas on which the Brandenburg Orchestra plays.

De Maistre finished the concert solo with a series of harp arrangements showcasing virtuosity, nuance and refined control – the Spanish Dance from Manuel de Falla's La Vida Breve, Francisco Tarrega's Recuerdos de la Alhambra, and a condensed arrangement of themes from Smetana's Vltava (The Moldau) – though not the complete tone poem as the program suggested.