Home » Music » Young Dolph's Life Celebrated in Memphis: 'He Was Such a Benevolent Spirit' 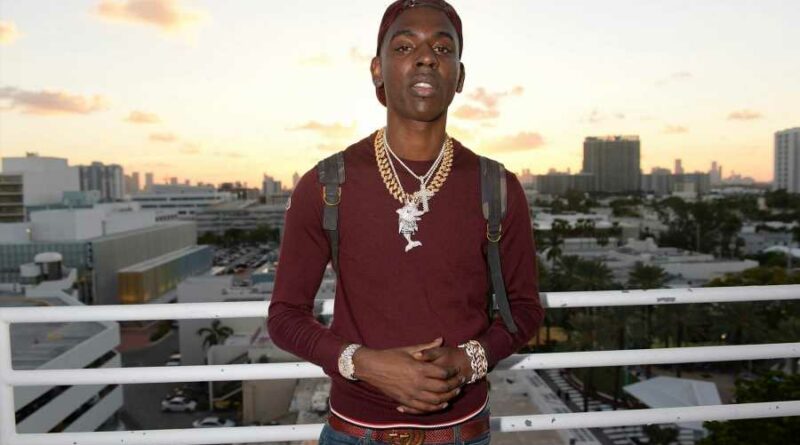 The late, great Adolph Robert Thornton Jr. spent his entire rap career campaigning to be the King of Memphis, through his soul-stirring music and a selfless generosity to his community that felt as large as the signature diamond-encrusted Paper Route Empire dolphin that stayed around his neck. On a warm and somber day, Dec. 16 — nearly a month after his life was tragically cut short — Young Dolph’s life was celebrated in royal fashion at Memphis’ FedEx Forum, in a building full of family, peers, friends, and supporters from all across Tennessee.

As the live-streamed event began, the audience was greeted with a heartfelt montage of videos, footage, and other highlights of Dolph’s life and music. The tribute was followed by video messages from his friends, peers, and collaborators — people like T.I., Gucci Mane, Gangsta Boo, C-Murder, 8Ball & MJG, Berner, Paul Wall, 2 Chainz, NFL hall of famer and Jackson State coach Deion Sanders and his son Shedeur, and Juicy J with a poignant call to end the violence in the streets of Memphis.

“A man should not have to pay a price of death because he excels,” said Dr. W.W. Herenton, former mayor of Memphis. “Because he has a lifestyle of his own. Because God gave him talent. He should not have to relinquish his life of being himself when he gives to others… We need to love each other and respect each other. And that’s what Young Dolph was about.”

Dr. Earl Fisher then led the audience in a chant, calling out Young Dolph’s name, before taking aim at the legacy of racism in Memphis and speaking on why Dolph deserved to be honored.

Keke Wyatt led a gospel tribute to Dolph, performing “His Eyes on The Sparrow” followed by one of Dolph’s favorite songs, “Stand” by Donnie McClurkin. Later, Bobbi Storm performed a soul-touching rendition of “Never Can Say Goodbye” and “You Are My Angel” over a montage of personal photos of Dolph, his longtime partner Mia Jerdine, and their young children. The emotions were heavy in the FedEx Forum while cellphone lights covered the crowd. Thankfully, a dance crew from Memphis lightened the heavy mood when they performed a dance tribute over a chopped-up mix of Dolph’s classic songs.

One of the most heartfelt moments of the memorial was when three of the younger people whom Dolph helped during his life — Timothy Fletcher; Jose Consado, who won $25,000 in a contest; and Lamborghini Jackie, who won another contest gifting off Dolph’s blue-and-orange Lamborghini — shared what the rapper’s generosity with his time and fortune mean to them.

Dolph’s immediate family arrived on stage and shared how he was “the glue that held his family together,” while his longtime partner and their young children Adolph “Tre Tre” Thornton and Aria Ella proceeded to share their fondest memories of Dolph.

“He was such a benevolent spirit,” Jerdine recalled. “He had a heart of gold, a heart of David. We would go on dates. We were walking and someone was like, ‘Can I get your leftovers?’ He would literally go back inside the restaurant, order something entirely different, just to get that person something to eat. It made me love and like him even more.”

As R&B diva Monica Brown arrived at the podium, she shared a letter written by the incarcerated C-Murder, who became friends with Dolph after he would frequently check on him.

“He gave things to my daughters financially. He talked to me. He checked on me weekly, and the first thing he would ask was how was my spirits. He was truly a thug’s angel,” she read from C-Murder’s letter. In her own words, she added a reminder that for Dolph, the lives and wellbeing of his protégé Key Glock, his manager Daddy-O, and the rest of Dolph’s Paper Route Empire were more important than their success.

State Senator Katrina Robinson presented Mia Jerdine and the children with a resolution from the state of Tennessee in Dolph’s honor, reiterating his lengthy musical accomplishments and acts of kindness and community service. She then proceeded to announce that Nov. 17 in Tennessee and Georgia will now be known as the Young Dolph Day of Service.

As the tears flowed throughout the FedEx Forum, Dolph’s young son gave the woeful crowd an encouraging message for the future.

“If you’re feeling sad about my dad dying, I’m going to let you know that everything will be fine,” proclaimed Tre Tre. “If you don’t know, then I know that I will become a great man just like my dad.”