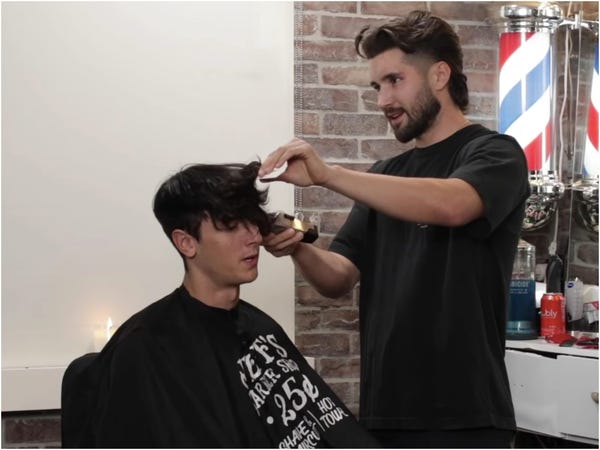 Bryce Hall, a TikTok star who had the power to his TikTok collective house shut off by the LA mayor, was the latest guest on Jeff's Barbershop.

Jeff Wittek, who hosts the show with Nick "Jonah" Antonyan, often invites controversial stars into his chair to ask them questions about their problematic behavior in his characteristically dry way that often makes guests oblivious to being the butt of a joke.

Hall and Blake Gray, two members of the Sway House content collective, were charged for throwing Hall a massive 21st birthday party attended by at least 100 people during the coronavirus pandemic.

Wittek introduced Hall to the show as "the new Jake Paul, if Jake skipped through all the Disney Channel stuff and went straight to the drugs and felonies."

"He's real easy to hate," said Wittek, adding that he was going to get to the bottom of why Hall was throwing parties and refusing to answer to the government.

"Did you mention that I'm the most hated guy on the internet?" Hall said as he entered the room, adding: "I'm trying to do better," when Wittek mentioned the comparisons to the Hall brothers.

Wittek then asked if the parties had been toned down a little bit.

"I haven't partied since my birthday," Hall said.

Hall and Gray had the Seay House's power shut off by the mayor of LA for "excessive partying" during the pandemic.

"Despite several warnings, this house has turned into a nightclub in the hills, hosting large gatherings in flagrant violation of our public health orders. The City has now disconnected utilities at this home to stop these parties that endanger our community," Mayor Eric Garcetti's statement read.

Hall tweeted about the lack of power, saying he "woke up sweating bullets" in the LA heat.

Wittek also poked fun at this: in the middle of Hall's haircut, the lights in Wittek's barbershop suddenly went off.

"The city must have heard you were over here," said Wittek, who put on a head torch. "The city got us but luckily my clippers are cordless.

Watch the full video below.