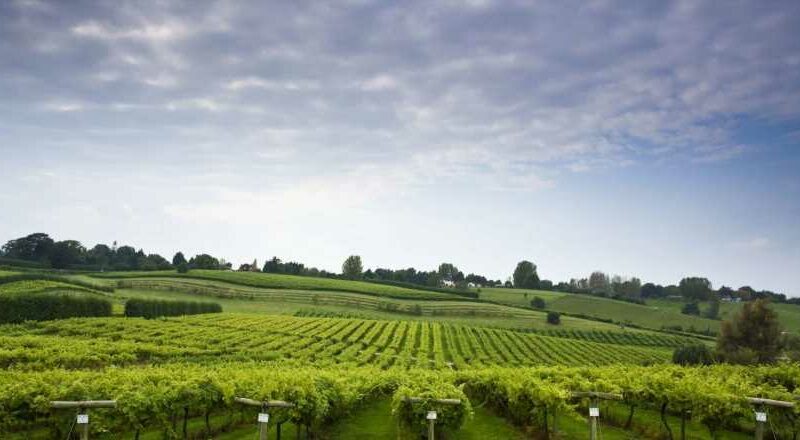 If you think you have to travel abroad to the wineries of New Zealand or California for a crisp summer sundowner, think again. These are some of the best vineyards the UK has to offer.

There’s nothing we love more than making the most of a scorching summer’s day, even if they do feel few and far between. And what better way to do it than raising up a crisp glass of chardonnay or a fragrant glass of pinot noir while sitting among the very vines it was grown from?

OK, the UK may not be quite as well known for its wine production as New Zealand’s sauvignon blanc capital Marlborough or California’s Napa Valley, but there are plenty of picturesque wineries nestled across the country just waiting to be explored.

In 2020, there were over 700 individual vineyards across Britain and a record 3.2 million vines were planted in England and Wales in 2019.

From Cornwall to Chichester, Yorkshire to Herefordshire, here is our pick of the best vineyards to visit in the UK.

The best vineyards to visit in the UK

With four acres of vineyards and stunningly scenic views, whether you’re a wine lover or not, you’ll enjoy The Vineyard at Leonardslee Gardens. Offering self-tutored or tutored wine tastings, walking tours and an exhilarating sabrage experience (opening a bottle of wine with a sabre, that is) it’s certainly worth the trip into the southern countryside.

Just 20 minutes from Cardiff city centre you’ll find Llanerch Vineyard, the oldest vineyard in Wales. If you plan to take afternoon drinks a little further, Llanerch is also home to five-star hotel rooms, perfect for a night and day among the vines.

The vineyard in Ryedale, North Yorkshire, was planted in 2006 and is the most northerly commercial vineyard in Britain.They not only produce delicious wines that have won awards but they also dabble in sparkling wines and cider.

Chapel Down is the UK wine industry’s leader, and is located in the beautiful Kent countryside, close to the picturesque market town of Tenterden. Perfect for a day trip from London.

Oxney’s wines are made in a converted Grade II listed square oast house and their 35 acres of vines produce around 20% of all organic grapes grown in the UK.

Three Choirs is one of England’s oldest vineyards, with the first vines being planted in 1973. They now boast over 75 acres and a selection of delicious British wines.

Found at the foot of the South Downs National Park, Tinwood has quickly established a reputation for producing the very finest English sparkling wines.

Be sure to check out their tasting room, a glass-covered veranda and outdoor patio with a view overlooking the vines.

This charming vineyard is situated alongside the ancient Roman city of Uriconium (Wroxeter) and was planted back in 1995.

Camel Valley has been producing award-winning wines in a beautiful corner of Cornwall since 1989. The winery has won both national and international awards and is considered a gem of the Cornish countryside.

Tucked away in the meandering Wye Valley of South Herefordshire, the Castlebrook vines were planted in 2004 on the site of an ancient Roman vineyard. They now grow 21 different clones of the three traditional champagne grape varieties.

The setting itself is filled with history. The Castle Brook name is derived from the farmhouse that sits at the bottom of the vineyard. This ancient building, mentioned in the 1086 Domesday Book as a coaching inn, is named after both the ruins of Penyard Castle which overlooks the valley and the Coughton Brook which runs through it.