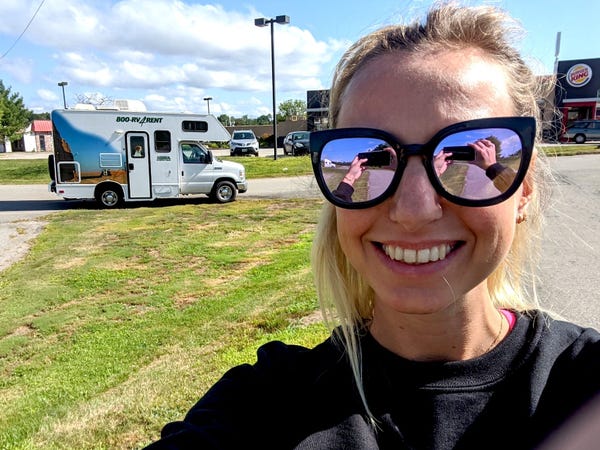 When my friend and I were handed the keys to a 20-foot-long, 12-foot-high, and 7.5-foot-wide motor home for a road trip with nary an orientation, we didn't drive away feeling confident. Mildly terrified and drenched in sweat might more accurately describe us.

Twenty minutes in, we barreled through a freeway overpass with a 9.7-foot clearance, yet somehow made it through unscathed. That was just one of the many mistakes we made renting an RV for the first time.

We survived to tell the tale, logging 1,100 miles in five days while driving a Class C motor home from New York City to Acadia National Park, Maine. And while five days does not an expert make, my RV trip taught me a lot about the lifestyle.

Here's what I learned.

The RV rental company let us drive off the lot and go on our merry way just like we would if we were renting a car. 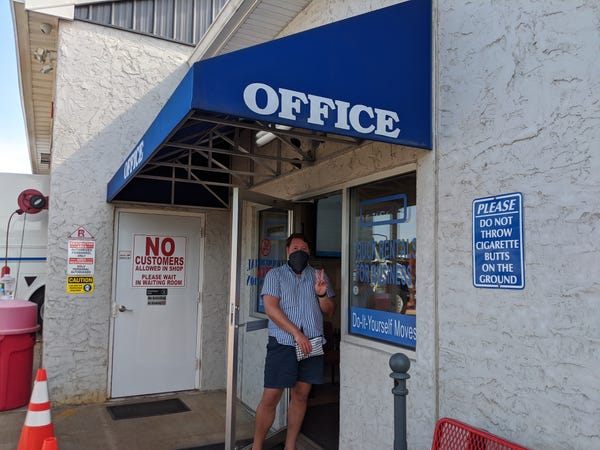 It turns out, renting an RV is a lot like renting a car. As first-time RV renters, we were surprised to be handed the keys to the motor home after a five-minute explanation of the vehicle, without so much as a safety video or at least a warning about clearance.

While this is fairly standard, as novices, we drove off the lot with more questions than we had come with.

Although we eventually figured everything out as we went — and the RV came with a rental assistance guidebook — we should have asked more questions right off the bat. 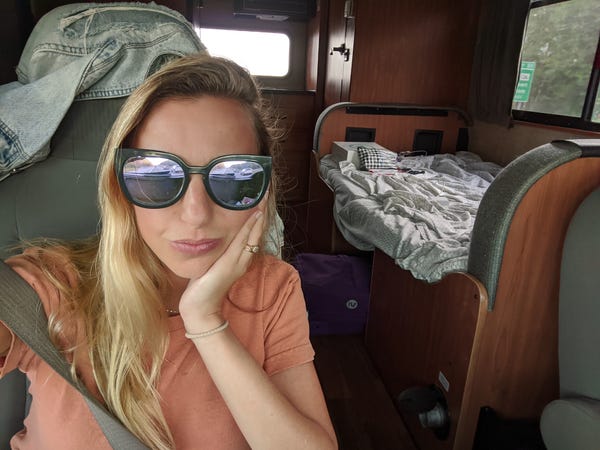 Like, really loud. Having a conversation while driving, or even listening to the radio (there wasn't an aux cable or outlet) was almost impossible. I had a sore throat from yelling over the din after day two. 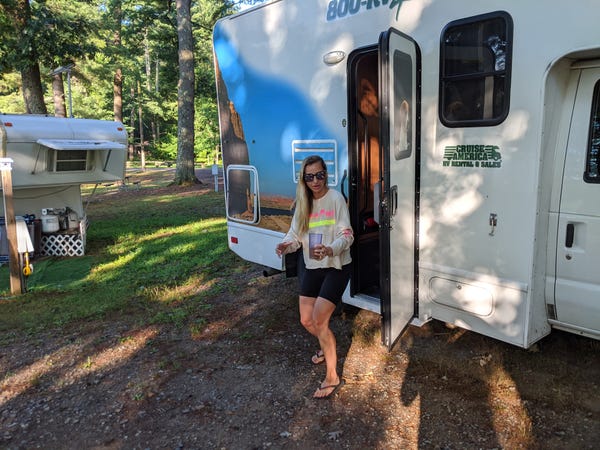 Every time one of us moved, you could feel it in the RV. When my friend tossed in his sleep, the whole vehicle would shift, but even when neither of us was moving there seemed to be constant light rocking.

We both noticed how we'd sort of stumble on dry land outside of the RV throughout the trip, expecting movement where there was none. I was reminded of my time on the world's largest cruise ship.

Planning your route is actually the biggest stressor, in my experience. 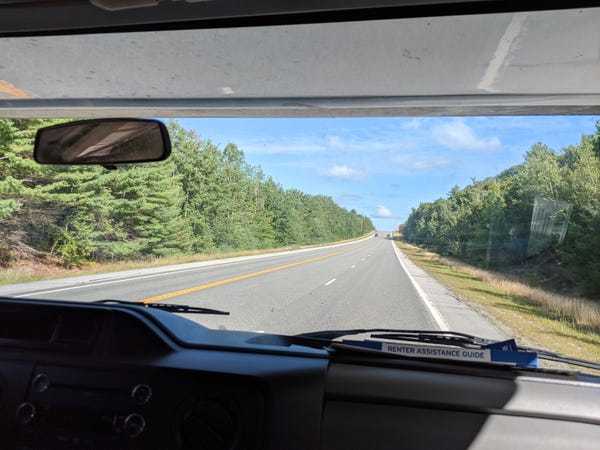 As our near-death experience about 20 minutes into our adventure taught us, not every road is RV-friendly. You need to be aware of your weight, height, and the clearance of any tunnels or bridges you might encounter on the way. We were also told not to take any underwater tunnels because of the propane tank's flammability and pressure.

And you'll need to add an hour or two to the time you or a map app thinks it will take since driving an RV is slower than a regular car.

While I downloaded an app that promised RV-friendly routes, I found it wasn't the best piece of technology and added many hours to every route, so we quickly abandoned it, choosing instead to do research on each drive before leaving.

Not everywhere is RV-friendly and it can be very difficult to find parking. This can really limit where you go. 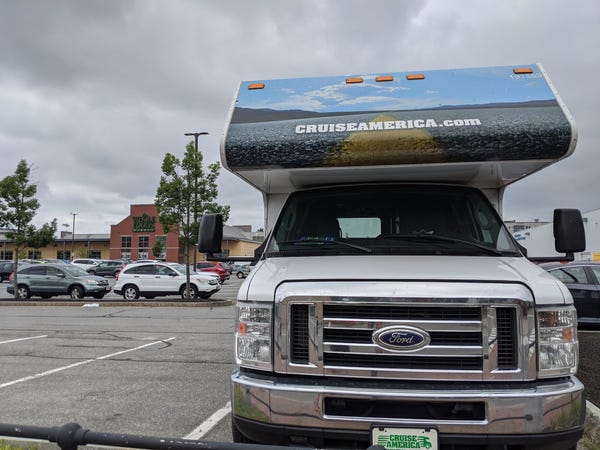 Not all parking lots allow RVs, not even ones that you pay for, so you can't exactly drive into a city for a quick lunch or stroll like you might in a car.

Not even all national parks, with their narrow roads and antiquated infrastructure, are RV-friendly. While we wanted to see the sunrise from Mount Cadillac in Acadia National Park, we couldn't drive there with the RV — even though our RV, at 20 feet in length, is one of the smallest motor homes you can get.

When you have a motor home, you can nap and pee anywhere. 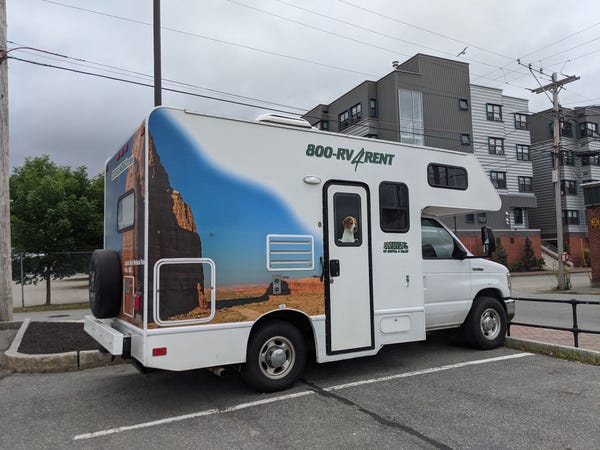 This is kind of an obvious one, but it's pretty amazing to be able to just pull over when you need to use the bathroom, need a nap, or want to make a snack or grab a cold drink, instead of searching for rest stops or gas stations.

Even in cities, after hours spent walking around and exploring, it was convenient to stop back at the RV and use the bathroom. This was especially great during a global pandemic when many restaurants and shops won't allow guests to use their facilities. 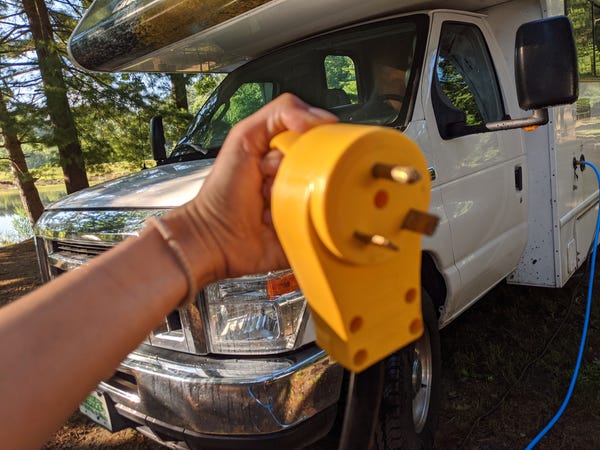 Despite our initial panic upon seeing the RV's control panel full of lights, knobs, and switches, and its exterior cables and hoses, getting situated at the campsite was as easy as charging a phone. All we needed to do to have running water and electricity was plug into our campsite's electrical outlet and attach our hose to its water pipe.

You will have to deal with sewage, no matter how short your trip. 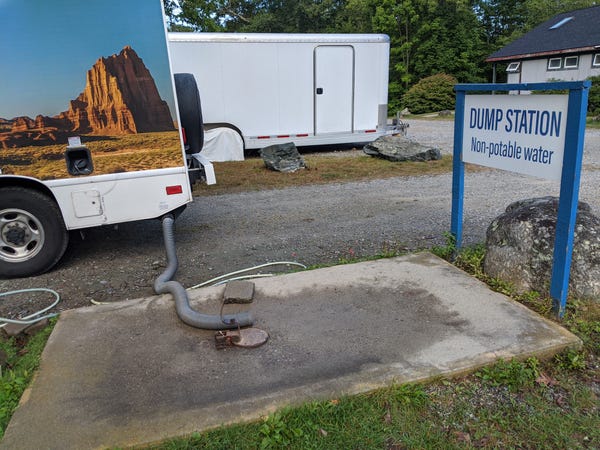 Despite having a 17-gallon sewage tank, the rental agent said we'd have to dump it out daily. I don't know how often she thought my friend and I would use the bathroom, but this seemed excessive.

However, after my first quick shower, the bathroom flooded and the water ("grey water" in RV speak) wouldn't drain. So while we didn't have to dump the sewage tank ("black water"), we did have to dump the grey water tank on day two. And since the process is the same, we just did both simultaneously.

Dumping the tanks was actually a lot easier — and far less gross — than I had feared. 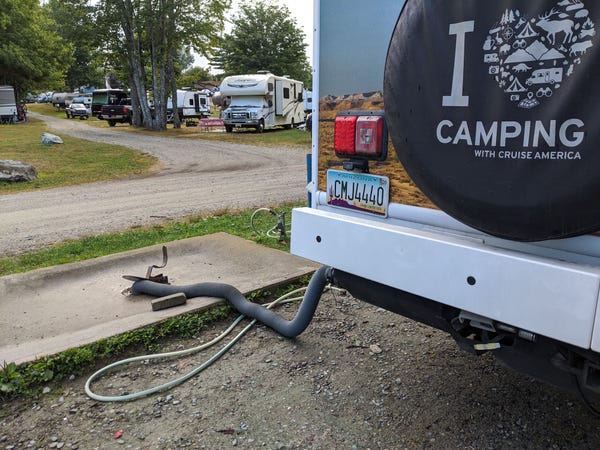 Campsites have dump stations, and all you need to do is drop the RV's sewage hose down a hole in the ground, open the valves, and wait for the tanks to empty. This took us no more than 10 minutes. Despite having read horror stories of poop spraying everywhere, our experience went off without a hitch. To be fair, we had only been using the van for 48 hours at that point so the tank was probably not that full.

RV life is a lot more like camping than I expected. 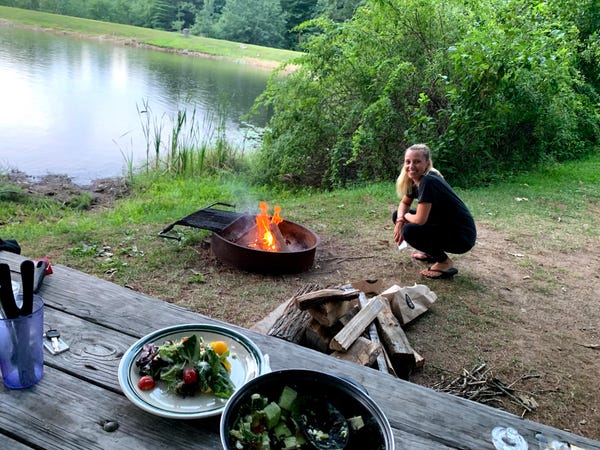 I spent almost three months camping in a tent across Australia's east coast during my gap year, and this trip reminded me a lot of that time. While I congratulated myself on being super clever and prepared when I packed toilet paper, dish soap and a sponge, paper towels, and a gallon of distilled water… I quickly realized I had no matches to start the stove or to make a fire in our private fire pit, the water lasted only a day, and we were sitting in pitch darkness when eating outside, getting bitten by mosquitoes.

Luckily, a quick trip to the nearest convenience store rectified this.

You need a lot of stuff. 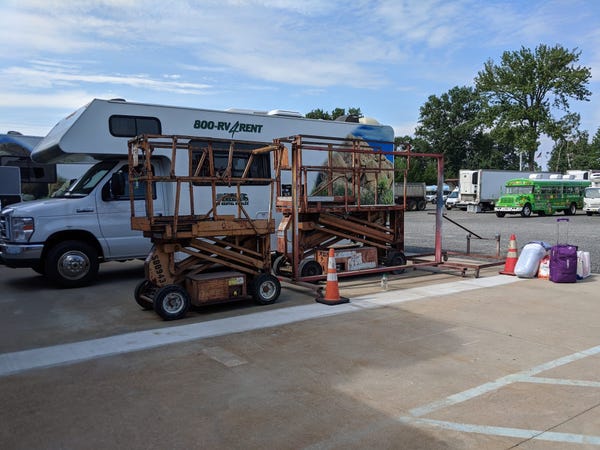 While you don't want to overpack since storage in an RV can be limited, you'll need a lot of stuff, just like when you're going camping. We schlepped sheets, pillows, towels, water, cleaning supplies, and food provisions as well as clothes, and still, we didn't have everything we needed. We ended up having to buy candles, hand soap, and matches on the road.

To try and minimize our luggage, I splurged on the $110 kitchen set, or "Vehicle Provisioning Kit," that our rental company Cruise America offered.

Despite a disclaimer on its website stating that the set may vary by location, it was somewhat insufficient, in my opinion, as it lacked bowls. If you're choosing not to pack certain things it would be helpful to know what you're going to get ahead of time.

You need to put everything away that isn't nailed down every time you drive. 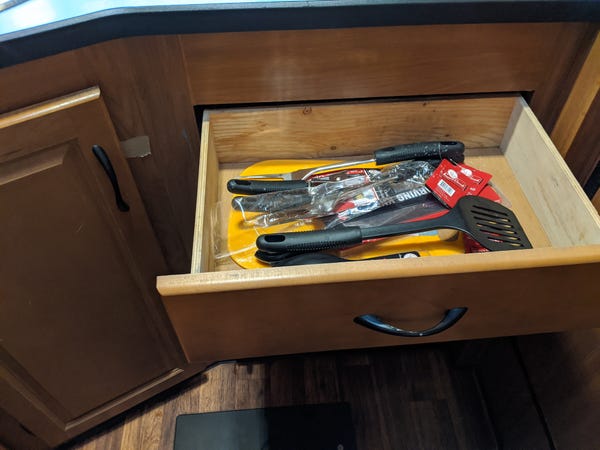 One thing that truly surprised me was how the cupboard doors and drawers didn't seem to have any special latches or magnets. Annoyingly, the drawers in the kitchen slammed open every single time we accelerated the RV even a little bit.

Anything on the table or kitchen counter had to be put away before driving anywhere.

It can be really expensive to road trip in a rented RV. 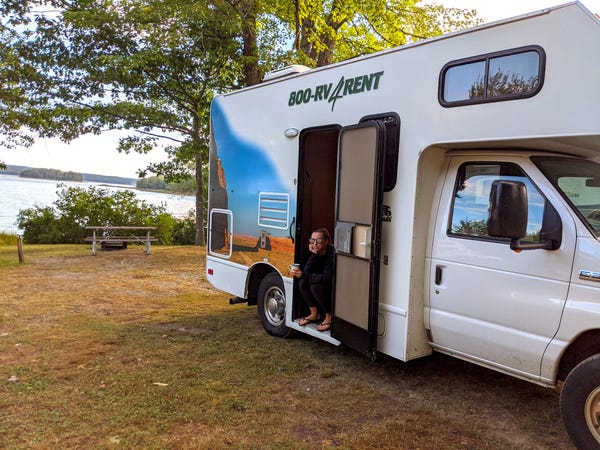 Between the actual rental ($225 a night for the smallest RV they had), the campsites (between $60 and $110 per night where we went), tolls, gas, and extra fees from the rental company (including mileage, insurance, generator use, and the kitchen kit), the trip ended up being way more expensive than I thought it would be.

While a lot of these fees are standard, and the rental company we used was upfront about them, it's worth doing the math ahead of time. If you're planning a long trip, it may even be cheaper to buy a used RV instead of renting one.

Our RV was definitely a gas guzzler, though it used less gas than I had expected. 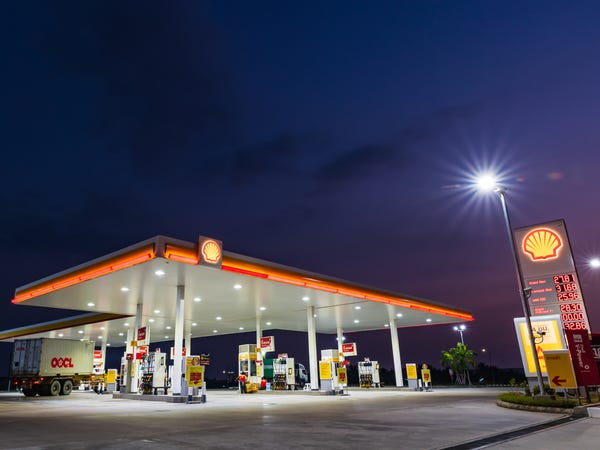 You have running water… but can't use it for much. 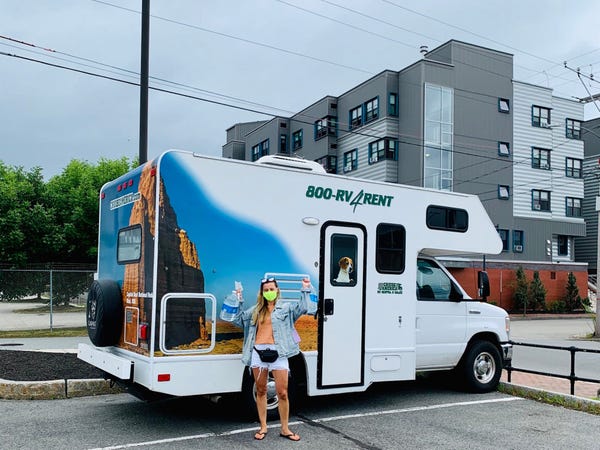 I didn't expect to be able to drink from the tap, but was surprised to see signs in the kitchen warning against using the tank water for cooking and cleaning produce.

The RV was not as difficult to drive as expected. 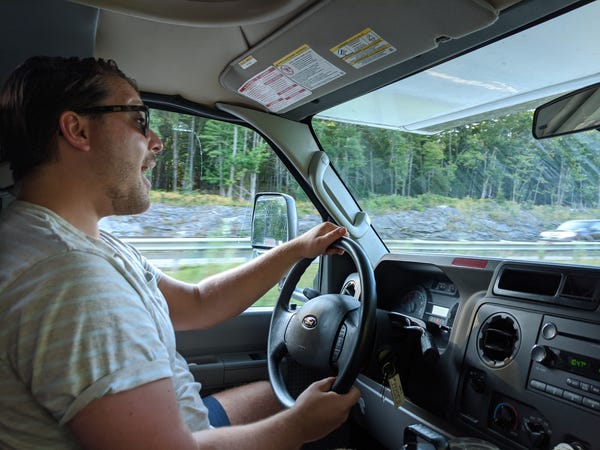 Disclaimer: I didn't drive a single mile, but my friend — who had never driven an RV before — said it really wasn't all that different from driving a large SUV. While it took a little bit of an adjustment in the beginning, he took to it very quickly.

Our RV seemed a bit dated. 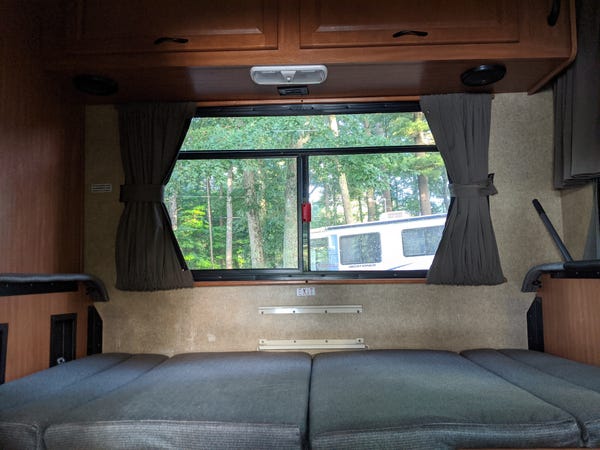 A Cruise America representative told me on the phone that the oldest compact RV they have at the New Jersey location we rented our vehicle from dates back to 2017. While I don't know what year mine was from, it felt a little older and more worn to me than that — especially judging by its CD player and lack of outlets or a backup camera.

The fridge runs on propane, and you need to turn it off every time you're pumping gas. 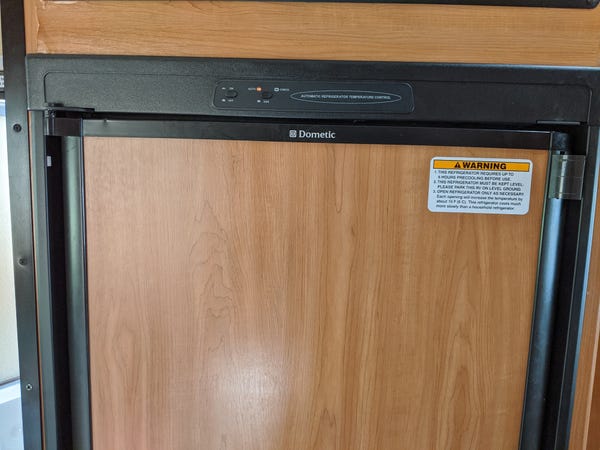 Turns out, these propane-based fridges use an electric ignition that can create a spark and explode. While we were only told to turn it off when pumping gas, many RV-ers seem to agree that appliances should be turned off while driving in general, though that usually means sacrificing heating and cooling systems.

Keeping the generator on eats fuel. 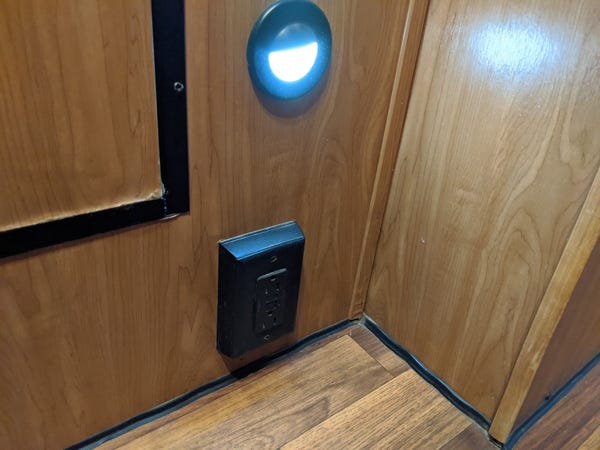 If I remember correctly, the generator in our RV consumed about a gallon of fuel for every hour we kept it on.

Despite being the smallest available motor home, our RV was roomier than I thought it would be, though it didn't seem to have the space-saving features I expected from a tiny home on wheels. 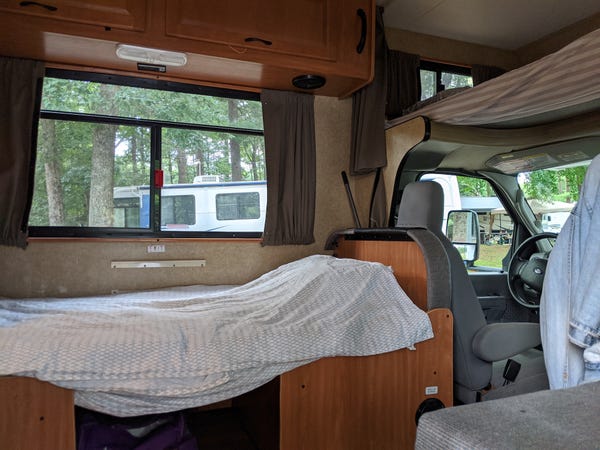 While the bathroom and kitchen were tiny, they were fully functional. My friend and I slept comfortably in separate beds (OK, mine was for kids, but at 5'4" I was totally comfortable), and had room to move around each other.

While there was enough storage space (at least for us, traveling less than a week and barely unpacking), I was surprised that there weren't really any clever little tricks for maximizing space, besides a storage area for the table leg when you turned the dinette into a bed.

You can take a full tour of our RV here. 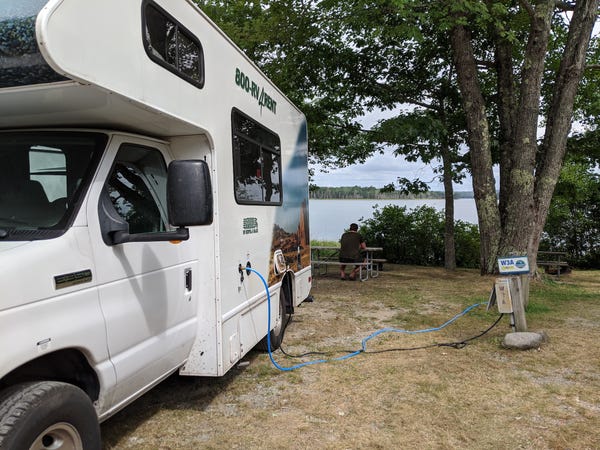 We had limited space at our campsite, so we were always sort of close to the RV. Unfortunately, that meant constant waves of a slightly sulphuric smell.