Home » Travel » 5 Of The Germiest Places In Hotel Rooms

When you book a hotel room, you know you’re signing up to stay in a space where hundreds and maybe even thousands of people have stayed before you. It’s not news that previous guests leave germs behind, but you might be surprised to learn where those germs are lurking.

With 14 to 16 rooms to clean in an eight-hour shift, hotel staff don’t usually get much time to clean a room, its linens and appliances from top to bottom ― roughly 30 minutes on average, or less during a busy season. (That’s why it’s important to tip the hotel’s cleaning crew if you’re satisfied with your room’s cleanliness.)

It’s also important to note that unless you have an immune deficiency, the germs you’ll find in your hotel room most likely aren’t dangerous. After all, you’re surrounded by bacteria and viruses everywhere you go, and your chances of getting sick from germs left by other hotel guests are low. Still, it’s important to take precautions and wash your hands regularly.

Here are five items in your room to keep your eye on:

Admit it: Having access to premium TV channels in your hotel room can be pretty exciting. Or maybe you just like listening to the news or weather while you get ready in the morning. Whatever your preference, the TV remote is likely gross. Hundreds of hands have touched the device, and it’s probably not high on the housekeeping team’s long list of things to clean.

Jim Inglis, Valencia College’s program director for hospitality, told Click Orlando in 2015 that the remote control is usually “hands down No. 1” on the list of dirtiest spots in your hotel room.

The Bed Comforter or Duvet

Staff typically changes sheets between guests, but the turnaround for checking in new guests can be so fast that washing large comforters isn’t as easy. As we sleep, we release body oils and shed skin flakes, which can get on the bedspread along with bacteria we might be carrying.

Reneta McCarthy, a lecturer at Cornell University’s School of Hotel Administration, summed up the dilemma in 2011, telling CNN: “If you went through and you had a good system in place and you were trying to deep clean each of your rooms four times a year, is it possible that a bedspread might only be changed four times a year? Yeah, it is.”

Kelly Reynolds, an associate professor of environmental health at the University of Arizona, told Time magazine for a February article that if you want to stay away from germs on the bed, getting rid of the comforter is a good start.

“Your best bet is to avoid contact,” she said. “A lot of people will recommend just folding the bedspread back or throwing it on the chair and don’t use it while you’re there.”

Reynolds also said the carpet can be filled with germs, so maybe bring some slippers. 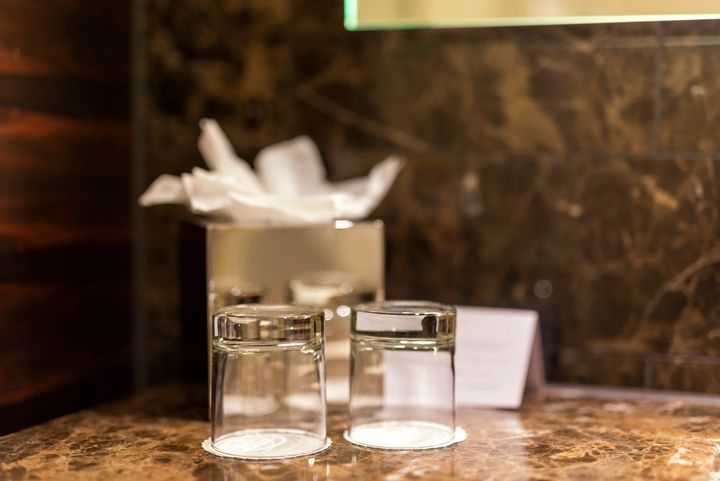 Many hotels now include plastic cups for their guests. If your room includes glasses though, you might want to wipe them down before drinking from them ― especially if those glasses are kept in the bathroom.

A 2018 study confirmed that flushing the toilet can contaminate many other surfaces nearby. Reynolds told Time that if glasses (and similar items like coffee makers) aren’t properly sanitized with a disinfectant ― not just wiped down with a dry cloth ― they can be havens for germs.

What’s more, a 2008 investigation of hotel cleaning habits by Arizona’s ABC15 found that 11 of the 15 hotels it tested across the country did not remove dirty glasses from the rooms for additional cleaning.

Ice buckets might require a decent cleaning too. In 2007, Condé Nast Traveler found E. coli on ice buckets it tested from hotel rooms.

The same research team that discovered bacteria on TV remotes also found heavy bacterial contamination on the bedside lamp switch in many hotel rooms. Similarly, as HuffPost explained in March, light switches, especially in the bathroom, are prone to collecting bacteria because of the many hands that touch them.

Before you say, “These weren’t in my room for very long,” hear us out.

The University of Houston-led research team found that in addition to the remotes and lamp switches and toilets, the housekeeping carts themselves harbor lots of bacteria. Duh, right?

But it actually affects you more than you think.

Because housekeeping teams have to clean many rooms in a day, there is the risk of cross-contamination. Dirty mops, sponges and towels can help germs travel from one room to another, so you might want to keep disinfecting wipes handy in case you think a surface might need some extra cleaning.