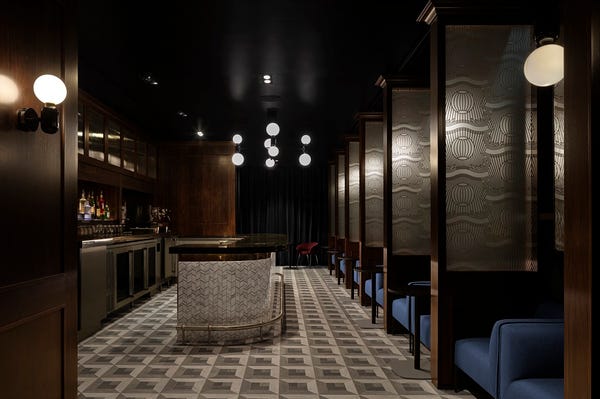 Somewhere inside New York's John F. Kennedy International Airport will soon be the city's newest speakeasy that you can enjoy, if you know where to look — and if you're an American Express cardholder with Centurion Lounge access.

OK, we'll give away some clues: The "1850" Speakeasy Bar is tucked behind a copper-paneled wall inside American Express' flagship Centurion Lounge in terminal 4.

While the bar, which will open in "coming days," is out of sight, there is no password required, a rep told Travel + Leisure.

The hidden bar, named after the year American Express was founded, channels a Prohibition era vibe in its concept and design, as well as its classic cocktails, from noted New York City mixologist Jim Meehan, best known for his East Village speakeasy PDT (Please Don't Tell), accessible from a phone booth inside the hot dog shop Crif Dogs.

"So many legendary cocktails have come out of New York City over the years, based around a variety of different spirits," Meehan said in a statement.

"With New York classics meets travel as the main theme, I've come up with a rotating cocktail menu that is experiential in nature and gives a nod to some of the city's greatest bars."

Among the cocktails on the initial menu will be an espresso martini and boulevardier. By day, the space will serve as a café.

The speakeasy is just one part of the new 15,000-square-foot space, which will be the largest lounge in the Centurion collection, as well as the first with two floors.

Also inside the lounge will be an Equinox Body Lab — a pre-flight experience with therapies like app-driven meditations and stretching, as well as a vibro-acoustic chair — and curated menu offerings from four-time James Beard Award nominated chef and New Yorker Ignacio Mattos, who serves as the executive chef.

"What I've created is a menu that's refined, eclectic, exciting and elegant, representing what I love most about New York City and its diverse communities," Mattos, known for his Michelin-star Estela restaurant, said in a statement.

Initial menu offerings include caciocavallo and egg sandwich with tomato marmalade, fennel salad with castelvetrano olives, and provolone and steak with romesco and taleggio sauces.

Safety measures are in place, including physically distanced seating, increased cleaning, and a limited capacity. Face coverings are required and food will be served by the staff, as opposed to buffet-style dining.

While the speakeasy is the first of its kind in the Centurion Lounges, Meehan has long been working with the premium lounges as the exclusive mixologist for locations at the airports in Las Vegas, Dallas/Fort Worth, Miami, Seattle-Tacoma, Houston, Philadelphia, San Francisco, New York's LaGuardia, and Hong Kong.